When COVID-19 struck Cebu, he has been relying heavily on social networking sites not only to keep connected with his peers but also with his online classes as well.

“Halus tibuuk adlaw kay online classes man unya inig human, maglingaw-lingaw na lang dayun. Mag scroll-scroll, ana (I’m on Facebook for almost the entire day. And after my classes, I would still be active on the app for entertainment. Scrolling for more content, like that),” Jun said.

The Philippines, like most countries in Southeast Asia, saw a rise in the number of both internet and social media users when lockdowns forced everyone to stay in their houses.

For the purpose of this special report, internet users refer to individuals with access to the internet while social media users are those who have existing accounts on various social media platforms.

Global digital authorities We Are Social and Hootsuite, in their Data Reportal Digital 2021: The Philippines, stated that there were 4.2 million new internet users between 2020 and 2021 when the COVID-19 pandemic was still raging here.

A total of 73.91 million internet users were noted in the Philippines, as of January 2021.

While the nation’s internet penetration rate stands at 67 percent, roughly seven percent higher than the global average of 59.5 percent, it is interesting to note that social media penetration rate is way higher – at 80 percent.

In the ‘world of the internet’, penetration rate refers to the percentage of a country’s population that has access to, and regularly uses, certain technologies and platforms.

The same report from We Are Social and Hootsuite stated that there are 89 million social media users in the Philippines as of January 2021.

In addition, they noted a 22 percent increase in the number of social media users here between 2020 and 2021. This meant that roughly 16 million new social media accounts were generated in the Philippines.

However, both agencies disclosed that their figures pertaining to social media users “may not equate to unique individuals.” Nevertheless, this does not erase the fact that the Philippines is the ‘social media capital’ of the world.

China and India both have the biggest social media markets. On their own, they outrank the Philippines in terms of the number of social media users. But Filipinos, like Jun, spend more time on social media than any other nationalities. 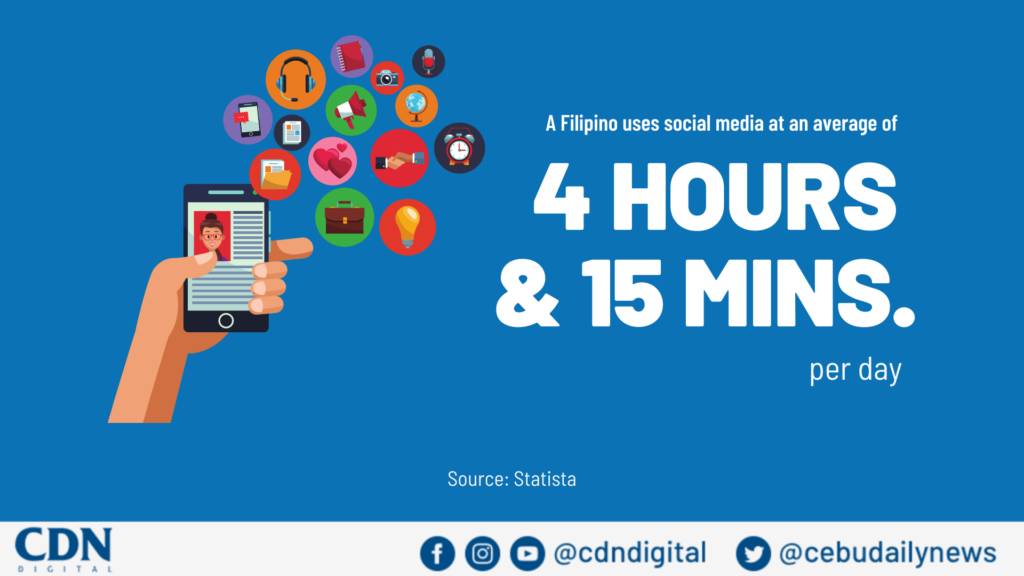 The 18-year-old college student said he would spend at least six hours on social media apps like Facebook. Both for his studies and for entertainment purposes.

As of 2020, German market research firm Statista found out that a Filipino uses social media apps and sites at an average of 4 hours and 15 minutes per day, higher than the global average of 2 hours and 25 minutes.

And lately, Jun has been seeing and scrolling through election-related posts, particularly those advertising bets for next year’s polls, more frequently than before. Jun is a newly registered voter in Cebu province, and he is expected to cast his ballot, for the first time, this May 9, 2022.

“Daghan gyud, labi na sa social media (There are many, especially in social media),” he said, adding that he believed the pandemic had accelerated the shift for more people to adapt and integrate digitalization into their daily lives.

Further insights from We Are Social and Hootsuite revealed that Youtube and Facebook are the first and second most-used social media platforms, respectively, among Filipino internet users aged 16 to 64 years old.

It comes as no surprise considering that around 99.4 percent of Filipino internet users surf on the web to watch online videos. The second most popular online content activity also involves videos – watching vlogs, short for video-blogs.

Instagram, another product by Meta Platforms, Facebook’s parent company, came next at fourth, with 73.4 percent of the country’s internet users aged between 16 and 64 years old accessing it.

Micro-blogging platform Twitter landed on the 5th spot, with Bytedance’s TikTok tailing behind at 6th.

Social Media and the Elections

COVID-19 entered the country roughly two years before the National Elections will take place. And the Commission on Elections (Comelec) predicted — and even anticipated — that next year’s elections will be different than those in the previous years.

With restrictions still in place, Comelec described the upcoming 2022 polls as a ‘game-changer’.

According to Commissioner Rowena Guanzon, in an interview with Manila reporters, next year’s National Elections ‘will be an election like no other’ as threats of the pandemic will likely linger within the first half of 2022.

“It is an election like no other because the rules of the game must change, the method of the campaign will have to change.  We can’t do face-to-face, I mean you can’t do a big crowd, rally, and so there’s a lot of reliance on social media as a campaign platform which is difficult for Comelec to compute in terms of campaign expenses,” said Guanzon.

Castillano, in an earlier interview with local media during the filing of Certificates of Candidacy (COC) between October 1 and October 8, encouraged local bets to utilize the internet and social media apps to campaign safely.

(Well, the Comelec, is, of course, advising, if ever you will campaign because there is no legal violation doing that. Just so that minimum health protocols will be practiced, we also do not want you to go from one place to another in this time when there is still COVID, utilize social media. I will be better for you to reach more people without risking your health. You’re not only risking your own health but also the health of the people and voters.)

In addition, the Comelec-Cebu official also urged local candidates to also encourage voters during their campaigns to get vaccinated if it meant suppressing the spread of COVID-19. 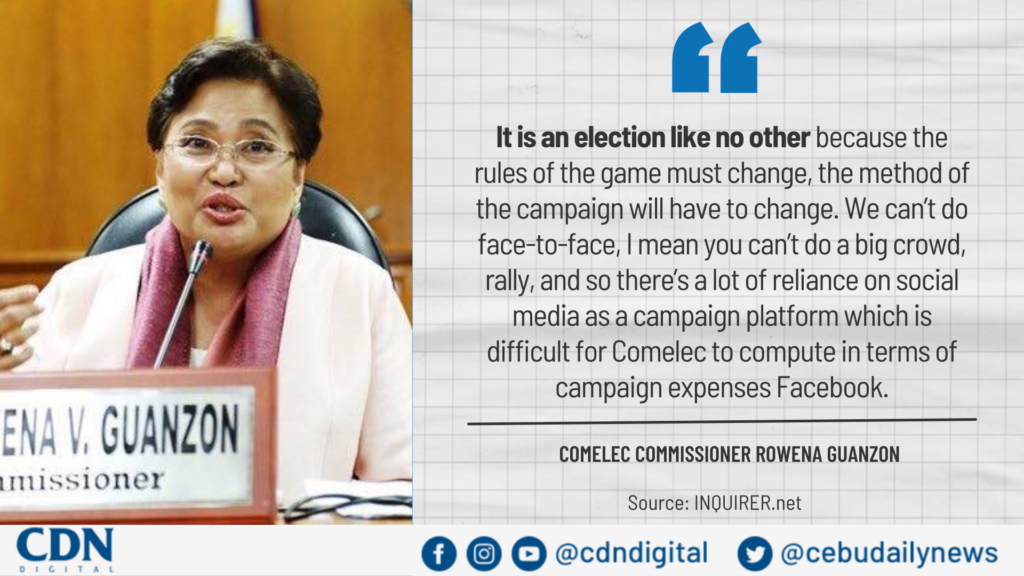 By July, the poll body announced that they will be rolling out policies and regulations for campaigning on social media platforms.

“We are looking for a way to compute ads through social media like Facebook and Twitter … We cannot regulate the use of social media [for campaigning]. We don’t have the technology for that. But I think we can compute the expenses if Facebook or Twitter will help,” Guanzon explained.

For Jun, social media is one of the leading digital platforms to find out what the candidates for the May 2022 elections are currently doing. But he is wary about the credibility of the content found on social media.

“Daghan gyud sa social media pero daghan sad dinha dili tinuud (There are a lot of information you can find on social media but a lot of them are not true),” Jun pointed out. (To be continued)