Smash, shout your way out of pandemic frustration 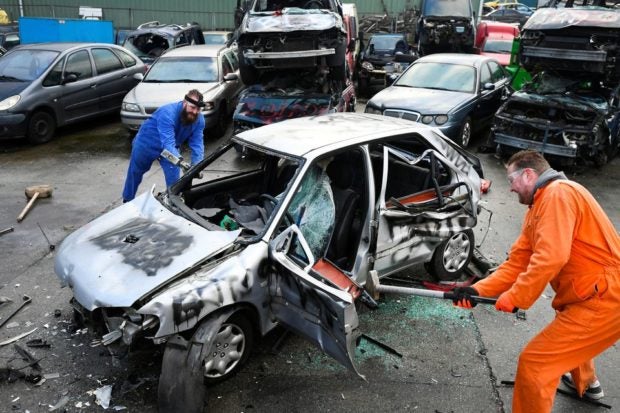 HAMMER TIME Twin brothers Steven and Brian Krijger swing away with their hammers to further reduce an old, junked car to bits. They offer the activity in a project dubbed “CarSmash” as a way for people to release the tension that has been building up as they cope with the pandemic lockdowns. —REUTERS

AMSTERDAM — One swinging a sledgehammer and the other a crowbar, twin brothers Steven and Brian Krijger grin as they take turns pulverizing a Peugeot 106 spray-painted with the words “F*** COVID.”

They are participants in “CarSmash,” a Dutch project aimed at providing locked-down locals with ways of releasing anger and frustration built up during a pandemic now entering its third year.

Dutch bars, restaurants and most stores have been closed since mid-December, when curbs took effect that the government — battling to contain record numbers of coronavirus cases — is not due to review until Jan. 14.

“There is nothing to do these days,” said Brian. “We can’t work because we own a bar and we are closed. So we thought we’d let some of that frustration go and smash a car.”

Merlijn Boshuizen, who runs “CarSmash” from a breakers’ yard in Vijfhuizen near Amsterdam, says clients begin by spray-painting “what’s present in their lives” onto their chosen vehicle.

“The minute that they start wrecking the car, we ask them to close their eyes, to feel their feet on the floor, feel the power, every vein in your body, feel what you are doing, and in that way to try to get it out of your life.”

A few miles to the south in the Hague, vocal coach Julie Scott runs “Screech at the Beach,” a scheme with similar aims that she developed while looking for “something physical and something to release some of the tension” built up by not being able to work indoors.

Facing into the wind side by side with Scott as it whipped off the sea, client Rozemarijn Kardijk jumped up and down yelling until she ran of breath while trying to suppress a laugh.

“You can just—Whaa! Let yourself go,” said Kardijk, a management secretary hoping to learn to speak with more confidence in her professional life. ”You don’t have to think about other things, it’s the wideness of the beach and the sea … Your voice goes over the sea and it doesn’t return to you. It’s a sense of freedom.”