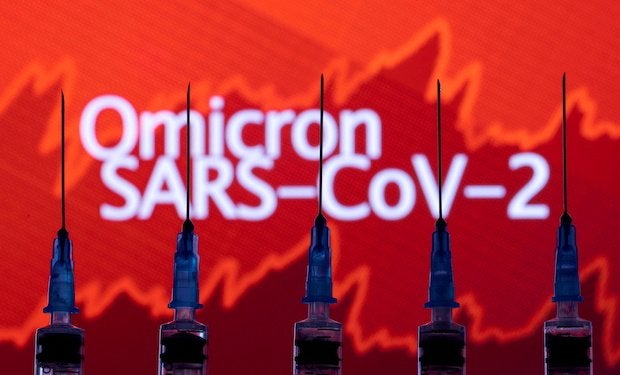 Syringes with needles are seen in front of a displayed stock graph and words “Omicron SARS-CoV-2” in this illustration taken, Nov. 27, 2021. (REUTERS/Dado Ruvic/Illustration)

CEBU CITY, Philippines – While recovering from the devastation of Typhoon Odette (international name: Rai), local governments here are bracing for the possibility of another spike of COVID-19 infections, one that is driven by the Omicron variant.

But they agreed in keeping borders open despite threats of the mutation in the National Capital Region (NCR).

In Cebu province, Gov. Gwendolyn Garcia has ordered hospitals and other Capitol-run health facilities to anticipate a possible surge of COVID patients.

Garcia also said the province will be sending additional supplies of oxygen and medicines, including those used to treat infected patients, to all 16 provincial and district hospitals.

The governor also urged the public not to panic over the Omicron variant.

“Like it or not omicron will be here. But how do we react to it?” she said.

Cebu City, the province’s capital, has also dropped its plan to reimpose the need for RT-PCR test results as travel conditions for travelers from Metro Manila.

Instead, the city government has begun reactivating its isolation facilities which will be used to house COVID-19 patients with little to no symptoms.

As of the moment, hospital occupancy levels in Cebu City remain low and within safe levels.

“But we approximately have around 8.8 percent COVID patients in private hospitals and almost 60 percent for our public. As per our record, we only (have) 9 hospitalized patients out of 82 covid patients, around a good 10 percent, all in their mid 20’s except for one 85 year old,” said Councilor Joel Garganera, head of the EOC.

Mandaue City will also be doing the same.

Mayor Jonas Cortes, in an earlier interview, revealed that the city government is not keen on returning the need for RT-PCR test results for inbound travelers.

Mandaue City, said Cortes, will instead focus its Omicron-related preparations by reinforcing their existing health protocols.

Meanwhile, Lapu-Lapu City has submitted its appeal to the Inter-Agency Task Force for the Management Emerging Infectious Disease (IATF-MEID), seeking to reconsider its inclusion in the areas in the country placed under a stricter Alert Level 3.

Local health officials here also backed the move made by the local government of Lapu-Lapu.

Dr. Mary Jean Loreche, chief pathologist of the Department of Health in Central Visayas (DOH-7), said there was an error in computing the city’s critical utilization rate that led to the national government’s anti-COVID task force escalating its status.

“It was based on the report of critical utilization rate sa hospitals. This was a mistaken encoding of numbers,” said Loreche.

Based on DOH-7 data furnished to reporters, hospital occupancy rates in all localities in Central Visayas, including Lapu-Lapu, are still within the safe zone.

She also said Lapu Lapu City’s alert Level 3 status was not due to the presence of Omicron variant, adding that Cebu remains free of a confirmed case of the highly transmissible mutation.

The rest of Cebu’s Alert Level 2 status is expected to last until January 31.

No border restrictions, Cebu to have one island policy