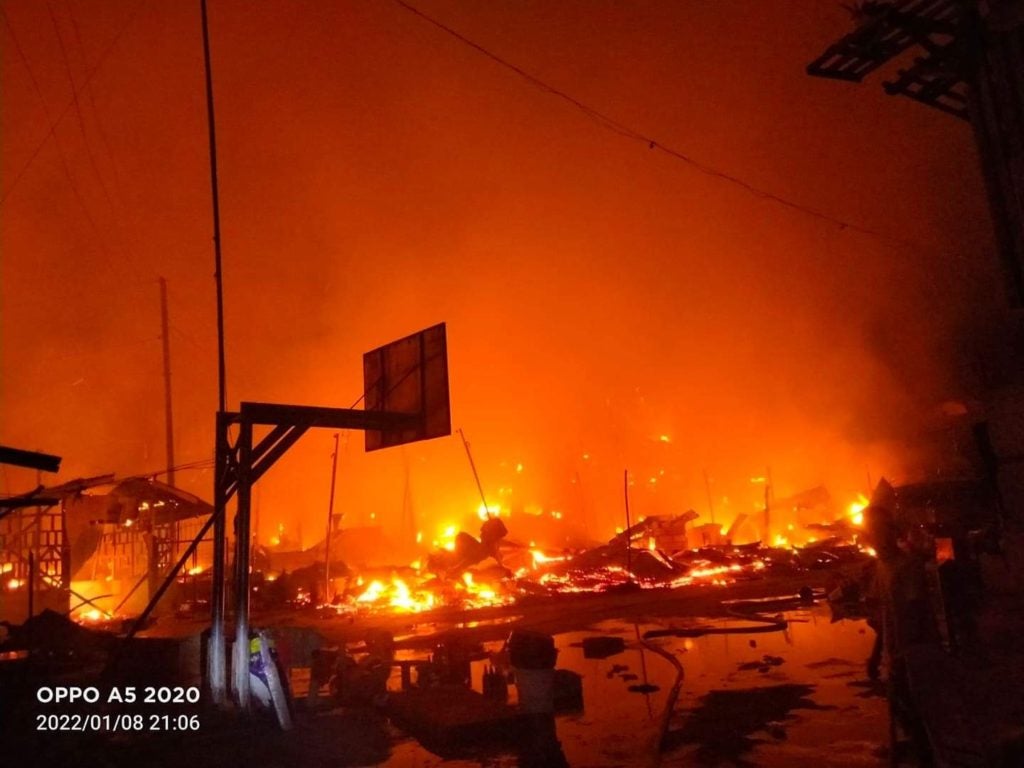 CEBU CITY, Philippines — At least P1.4 million worth of properties went up in smoke after four fires hit the the tricities of Mandaue, Lapu-Lapu, and Cebu in a span of 11 hours on Saturday, January 8, 2022.

The fire in Mandaue City at past 7 p.m. in Sitio Utnai, Upper  Barangay Tingub was the biggest one among the four fires that hit that day.

According to the Mandaue City Fire Office, the fire that hit Sitio Utnai displaced 150 families and razed 150 houses.

The Mandaue City Fire Office (MCFO) pegged the damage to property at P1,050,000.

Ababon further said that they had yet to gather statements from possible witnesses that might help them identify possible cause of the fire.

The city’s Social Welfare and Development Office have yet to provide final count of affected individuals as of this posting.

At about the same time as the fire in Mandaue City, a fire also struck at Barangay Looc in Lapu-Lapu City at 8:04 p.m. that day.

Gerodiaz said that since the area was located at the interior portion, only penetrator fire engines were able to enter and breach into the fire scene, which made their response challenging.

Arceo estimated the damage to property at P108,000.

Around 40 minutes later in another part of the barangay, firefighters responded to another fire in the barangay.

Arceo said that they responded to a fire in Sitio Upper San Lorenzo in Barangay Bulacao at 9:41 a.m.

He said that residents helped put out the fire which damaged three houses.

Arceo estimated the damage to property at P40,000.

He also said that they were checking if the fire was caused by old electrical connection and an unattended lighted candle.

Aside from the four fires on Saturday, on Sunday, January 9, Cebu City firefighters also responded to a fire alarm in Barangay Lahug.

Arceo said that electrical issues might be the cause of the fire which hit the abandoned house owned by Josephus Alicaya.

He, however, said that they had yet to verify this pending their investigation.

He estimated the damage to property at P40,000.