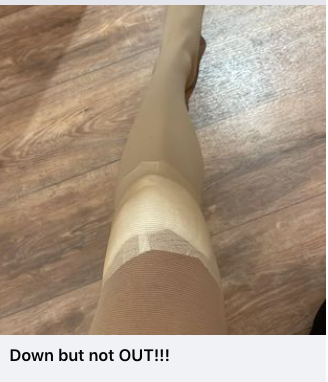 Star pole vaulter says his knee surgery is successful and he is ready to compete by the end of the month. | EJ OBIENA Facebook

In a Facebook post on Wednesday, Obiena said that his doctors were able to clean his left knee meniscus and successfully removed the metal screw attached to it.

“Down but not OUT!!! Surgery was successful. They have cleaned the meniscus and have removed the screw on my knee from the ACL reconstruction back in 2017 as the bone graft has fully solidified. It shouldn’t affect my recovery and were still on and aiming for 28th of January competition,” the 26-year-old Obiena stated on his Facebook post.

In 2017, Obiena underwent surgery after figuring in an accident during his training for the Southeast Asian Games in Kuala Lumpur, Malaysia. He tore his right anterior ligament after a bad landing.

Instead of giving in with his injury which many said to be a ‘career-ending injury’, Obiena endured months of rehabilitation which eventually put him back into action.

Fast forward to 2021, Obiena became the first Filipino to vie in the Olympics’ men’s pole vault event and is currently the No. 5 best pole vaulter in the world.

“Thank you very much to everyone who helped and supported me to make this surgery possible as early as yesterday. I am also thankful to Chairman Butch Ramirez for announcing yesterday that funds for my surgery is available. I may be able to use this money once available to me to reimburse the advances of good samaritans. My most immediate task is to get healthy and get back on track so that I can compete again for the country

. Everything else is priority number 2. Time for work to be done!!!

Obiena showed tremendous optimism amidst the controversy he is currently being involved with the Philippine Athletics and Track and Field Association (Patafa).

Patafa accused Obiena for mishandling his training funds and even resorted to dropping him out of the national pool.

Currently, the Philippine Sports Commission (PSC) conducts a mediation process between Obiena’s camp and Patafa to put an end to the controversy that stirred the country’s sports scene.

PSC: EJ Obiena signature only thing needed for mediation with Patafa to begin