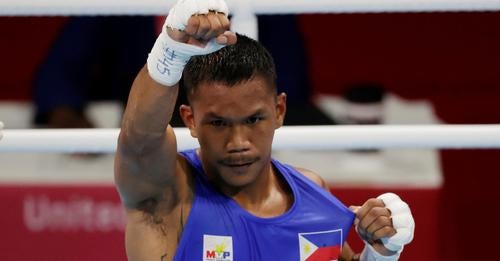 In a heartwarming Facebook post on Wednesday, January 5, the 26-year-old Marcial stated that it’s the right decision for him to support a fellow athlete and fellow Olympian.

In his post, Marcial, who bagged the bronze medal in the Tokyo Olympics’ men’s middleweight boxing event, said that the decision of the Philippine Athletics and Track and Field Association (Patafa) to drop and file criminal charges against Obiena just invalidated the latter’s efforts and sacrifices to bring honor to the country.

Marcial recounted the time that Obiena helped him out before the Tokyo Olympics.

“With the current issue surrounding my fellow Tokyo 2020 Olympian EJ Obiena – Ernest Obiena, I feel that it is only right as a fellow athlete and Olympian that I express my support and collectively ask to show our solidarity with EJ,” he said.

“The decision of the PATAFA committee to remove EJ from the national pool, I feel, was some sort of an invalidation of the efforts and sacrifices that EJ has made to bring honor to our country, something that every athlete can strongly relate to,” Marcial said.

“This unfortunate situation has affected his focus in his training costing him so much of his time, energy, and resources instead of pouring all his attention to his preparations for his upcoming season and tournaments,” he said.

“To EJ, know that many of our countrymen is standing beside you in this rather wretched fight. Trust that it will all fall into place and God’s favor will be upon you. Mabuhay ka at ang lahat ng atletang Pilipinong lumalaban para mairepresenta at mabigyan ng karapat-dapat na karangalan ang bansa (Long live all the Filipino athletes who fight to represt and to give the right honor for our country),” Marcial said.

Marcial also had his own fair share of struggles last year when he revealed that the financial support given to him from the Philippine Sports Commission (PSC) and the Association of Boxing Alliances in the Philippines (Abap) were not enough to sustain his training abroad.

Pacquiao, in one of his statements said that Obiena is a once-in-a-lifetime treasure in Philippine sports that shouldn’t be wasted.