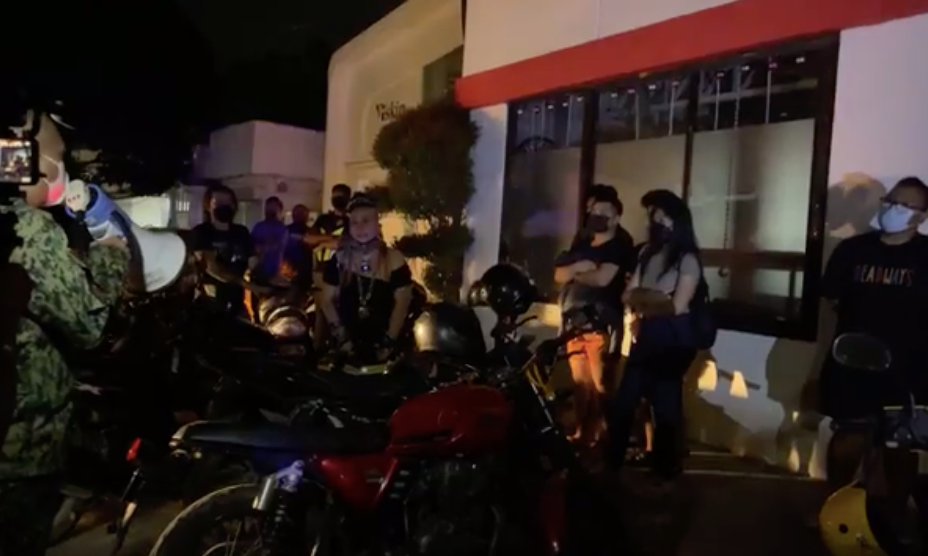 CEBU CITY, Philippines — Effective January 14, the Cebu City cops will enforce the new 11 pm to 4 am curfew hours and will strictly implement Oplan Bulabog, as the city is placed under Alert Level 3.

Police Lieutenant Colonel Maria Theresa Macatangay, information officer of the Cebu City Police Office (CCPO), said that they will remind the public to be at home before the curfew begins and follow the health protocols implemented as the city is now under the Alert level 3.

Acting Presidential Spokesperson, Secretary Karlo Nograles, announced on January 12, 2022, that Cebu City and Mandaue City have been raised to Alert Level 3 from January 14 to 31.

Macatangay said that Mayor Michael Rama has directed them to follow the guidelines from the Inter-Agency Task Force under the Alert Level 3.

However, if the city issues an ordinance and adds new guidelines to the existing ones, they will welcome these and be ready for the needed implementation.

Macatangay said the checkpoints that were set up to address criminality in the city and address security concerns for the coming elections are also still in place.

In his public statement released on Thursday evening, Cebu City Mayor Michael Rama re-emphasized and reminded the public on Oplan Puyo wherein heads of the families are required to have their children stay at home and that going outside must be for essential reasons. 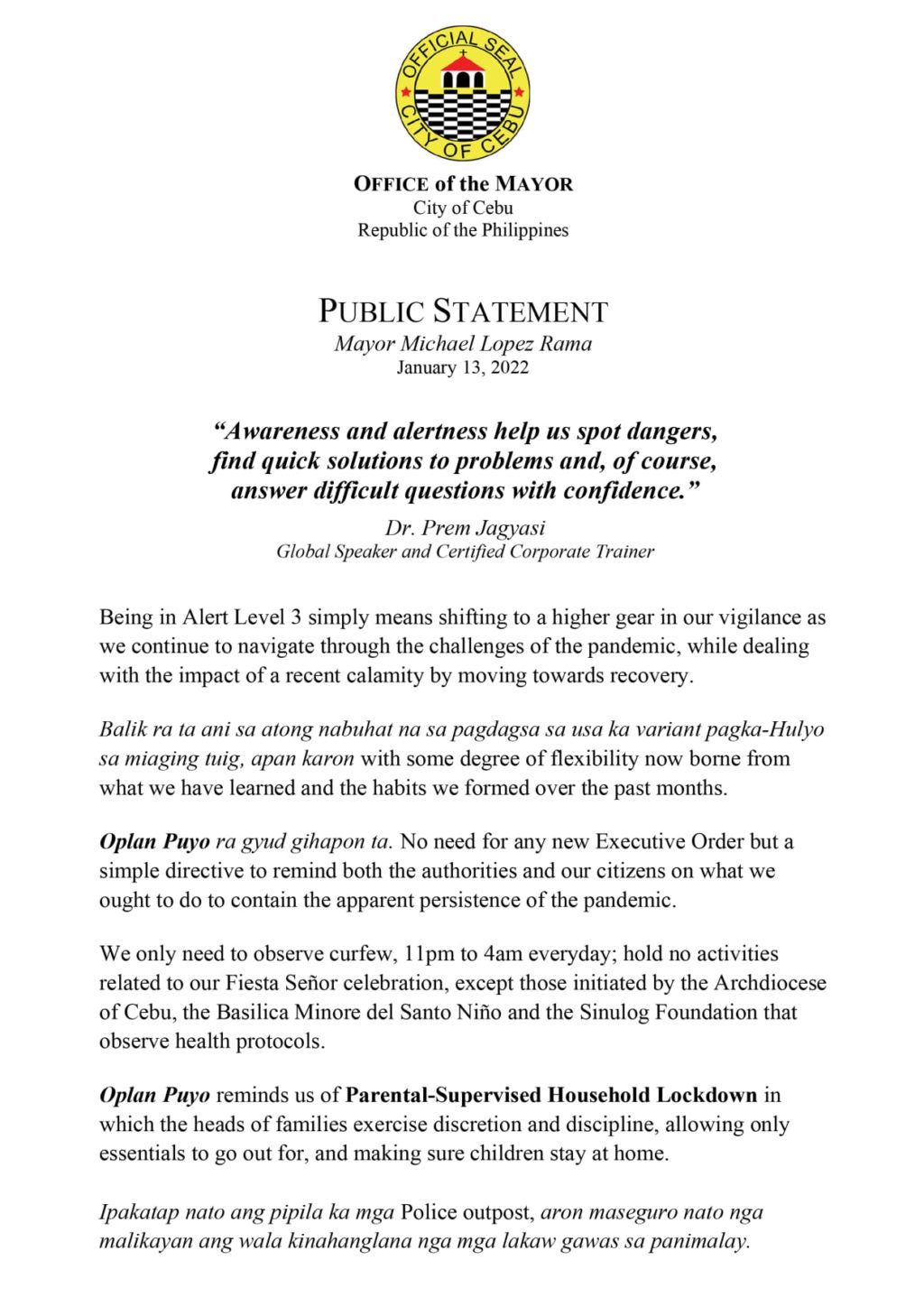 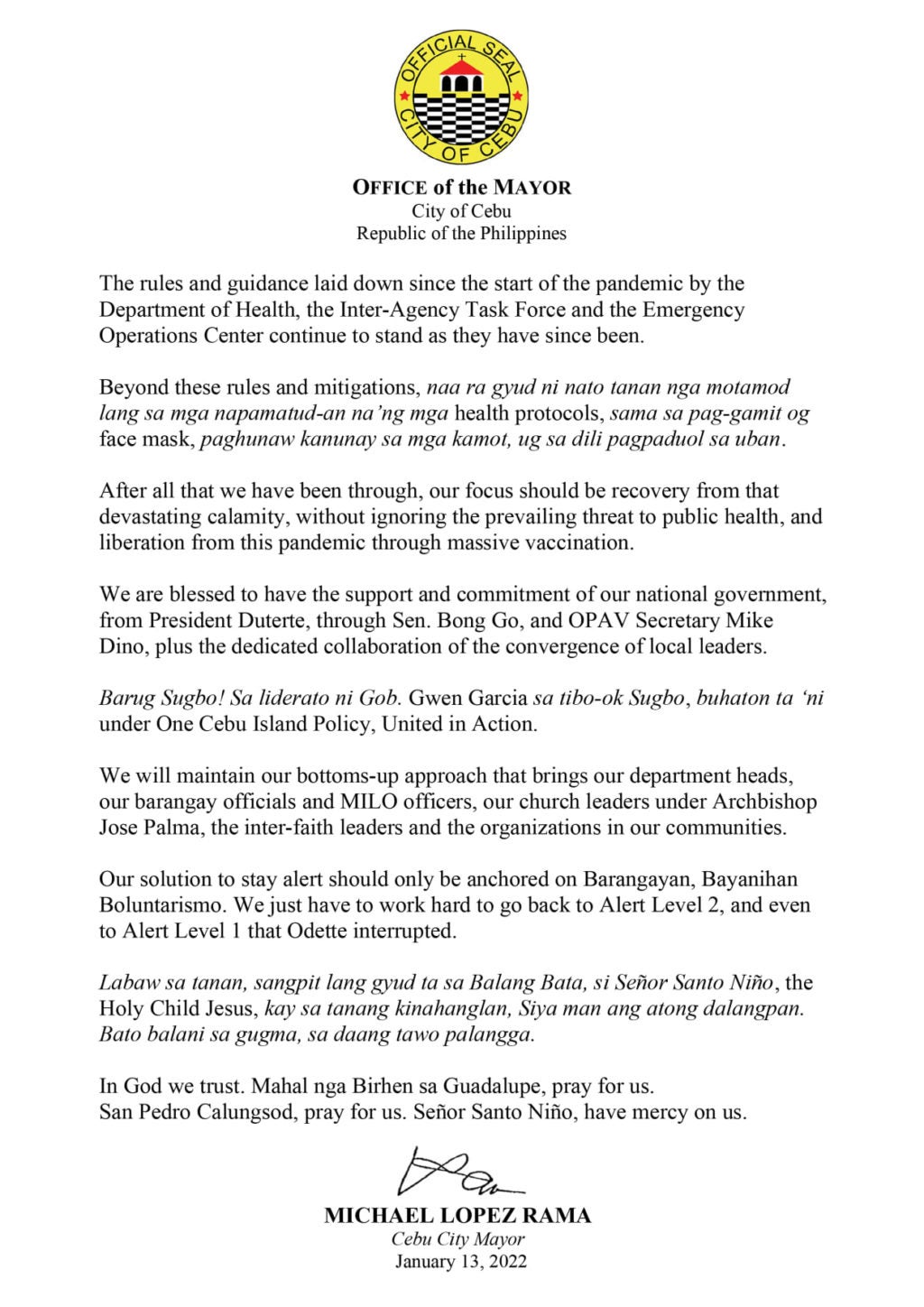 During their Oplan Bulabog on Thursday night, January 13, 2022, Macatangay said they were able to apprehend 122 individuals including 80 curfew violators. The rest were nabbed for not wearing face masks.

This is seven persons lesser than Wednesday evening’s 129 violators.

As the curfew is moved an hour earlier, Macatangay appeals for the public’s cooperation, especially from those not going out for essential work.

The police official said they are hoping there will be no more violators that they will apprehend in the coming days and that the public will heed this specific protocol.

“Dili nato himo-ong komplikado ang gipabuhat sa atoa karon, let’s make it simple. Nagkataas ang atoang COVID-19 cases,so unsa man atoang buhaton? Magpuyo tas atoang panimalay, mao ra jod na atong buhaton. Now, do we want to run after everyone and arrest them all? That’s one of the things na dili namo ganahan buhaton but if we see that the people are really hardheaded, we have no choice but to arrest them,” Macatangay said.

Let’s not complicate things. Let’s do whatever is asked of us. Let’s make it simple. Our COVID-19 cases are surging, so what are we going to do? We stay at home, that is what we need to do. Now, do we want to run after everyone and arrest them all? That’s one of the things that we would not like to do but if we see that the people are really hardheaded, we have no choice but to arrest them.)

As of January 13, 2022, the Department of Health in Central Visayas has logged 359 new cases in Cebu City, which brings the city’s total active cases to 1,364.

Macatangay further said that their deployment remains and that they will assess first if adjustments have to be done. He said the barangay peace and security officers (BPSO) and force multipliers are providing much-needed assistance in implementing the protocols. /rcg

READ: CCPO exec on COVID-19 response: ‘Logic will tell us not to relax’