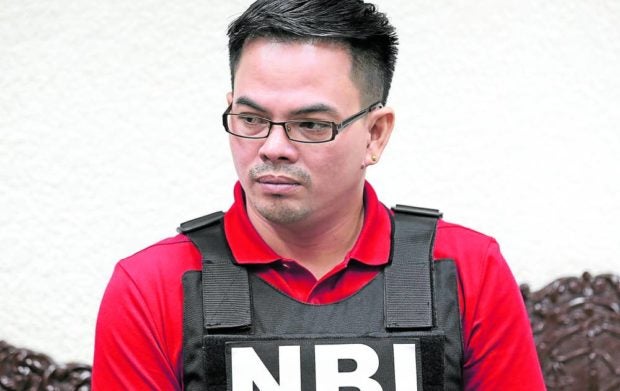 NBI officer in charge Eric Distor said Espinosa and two other detainees, whom he did not identify, tried to escape on Jan. 13 by passing through the air vent of the bureau’s detention facility on Taft Avenue.

He said the new head and executive officer of the NBI’s Security Management Section immediately conducted an inspection after learning about the supposed escape plan.

“As soon as they received the information, they immediately acted on it without delay,” Distor said in a statement.

“In one of the cells of the jail, the raiding team of [NBI] agents observed a deformed exhaust fan, which when removed, exposed a hole fit for a detainee to escape,” he added.

The NBI official said he had ordered tighter security and more frequent inspections of the bureau’s detention facilities.

Justice Secretary Menardo Guevarra said the NBI would submit a report on the incident.

“I have instructed the agency to intensify intelligence work and tighten… security in its detention facilit[ies], especially with respect to high-profile detainees such as Kerwin Espinosa,” he told the Inquirer.

Espinosa’s alleged escape try happened barely a month after a Makati City court cleared him and three others of criminal liabilities over a 2013 drug trafficking case for insufficiency of evidence.

Judge Gina Bibat-Palamos of Makati Regional Trial Court (RTC) Branch 64 approved the demurrers to evidence, or motions to dismiss on the ground of insufficiency of evidence, which Espinosa filed after the state prosecutor’s failure to “overturn their presumption of innocence” and prove there was a conspiracy to commit drug trafficking.

Espinosa has been under the NBI’s custody since December 2016, following his arrest and repatriation from the United Arab Emirates where he went into hiding after President Duterte identified him as one of the country’s biggest drug lords.

Then Justice Secretary Vitaliano Aguirre II opted to detain him at the NBI after the controversial killing of his father, Mayor Rolando Espinosa Sr. of Albuera, Leyte, while in police detention that year.

Aguirre had said that Espinosa could be a vital government witness against opposition Sen. Leila de Lima, a leading critic of Mr. Duterte who ordered the senator detained on drug charges.

The confessed drug dealer had earlier claimed giving De Lima, then justice secretary, P8 million as protection money to allow him to run his narcotics empire in Eastern Visayas.

The Espinosas were among the first high-profile targets of Mr. Duterte’s drug war.

Espinosa, according to Guevarra, still has pending criminal cases before the Manila RTC.

In October 2017, Espinosa pleaded not guilty before the Manila RTC Branch 26 in connection with illegal drug trading and firearms possession charges.

The charges were originally heard by Baybay City RTC Branch 14, but the Supreme Court ordered the transfer of the case to Manila upon the request of both the prosecution and defense, citing security reasons.

In August 2018, Espinosa also pleaded not guilty before Manila RTC Branch 40, where he is facing murder charges.

He and two alleged henchmen were accused of killing barangay captain Vicente Jabon outside the barangay hall of Doña Maria in Albuera, Leyte, on May 31, 2006. —WITH A REPORT FROM INQUIRER RESEARCH

Read Next
Seniors exempted from paying VAT on utility bills