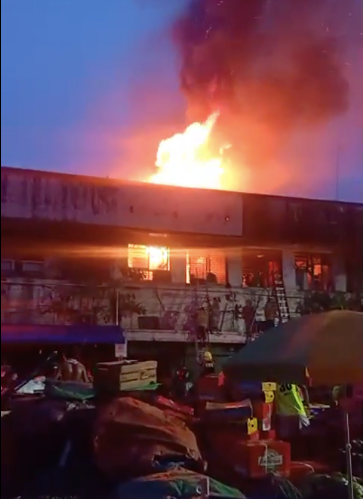 Fire hit a store, whose owner was renting space in a two-story building along Plaridel St., Barangay Ermita, Cebu City at nearly 6 p.m. on Saturday, March 5, 2021. The fire was put out at 6:17 p.m. | screengrab from contributed video via Paul Lauro

CEBU CITY, Philippines — The Cebu City Fire Office (CCFO) is reminding the public to check on the electrical wiring of their homes or buildings to lessen the risk of a fire incident.

This is what Senior Fire Officer (SFO2) Wendell Villanueva, information officer of the CCFO, said after successive fire incidents occurred here since the start of Fire Prevention Month 2022 last March 1, 2022.

“We are perplexed considering that we are observing the Fire Prevention Month this March. Supposedly, this time of the year is mostly sunny, but this year, it’s the exact opposite [as it’s alway raining]. I have talked with the investigators and they are still on the ground conducting investigation as regards the cause of the fire. But they are focusing more on the possibility that the cause has something to do with the electrical wiring,” said Villanueva.

CCFO said that in the first six days of the month, there were already six fire incidents that caused P14 million worth of damage. Majority of these fires were residential fires.

On March 1, the kickoff ceremony of the Fire Prevention Month was welcomed by a fire in Barangay Capitol Site and in Pardo.

On March 5, they have also responded to fires in barangays Mabolo and Ermita.

On Sunday, March 6, there were fire alarms in barangays San Antonio and Lahug.

Villanueva said there is also a possibility that the damage caused by super typhoon Odette may have something to do with the fires.

“Because those houses involved in the fire were damaged, perhaps, due to electrical wiring that was not checked by the licensed electricians [after Odette]. And  since it’s raining these days, [these faulty wirings] may have sparked, eventually causing a fire,” he said.

With this, Villanueva appeals to the public to have their electrical wirings  checked by licensed electricians.

“We appeal to the public that as much as possible, since most of the electricity is already restored, it would be better if we revisit the electrical connections and wirings that might have been destroyed by Odette,” Villabueva said.

Even if it’s easier said than done, Villanueva said that presence of mind is crucial in avoiding fire and responding to it when it happens. He added that it should be one’s habit to check on their devices and appliances at home that may cause a fire.

Rama to CPA: Collection of parking fees at Compania Maritima is ‘stupid’