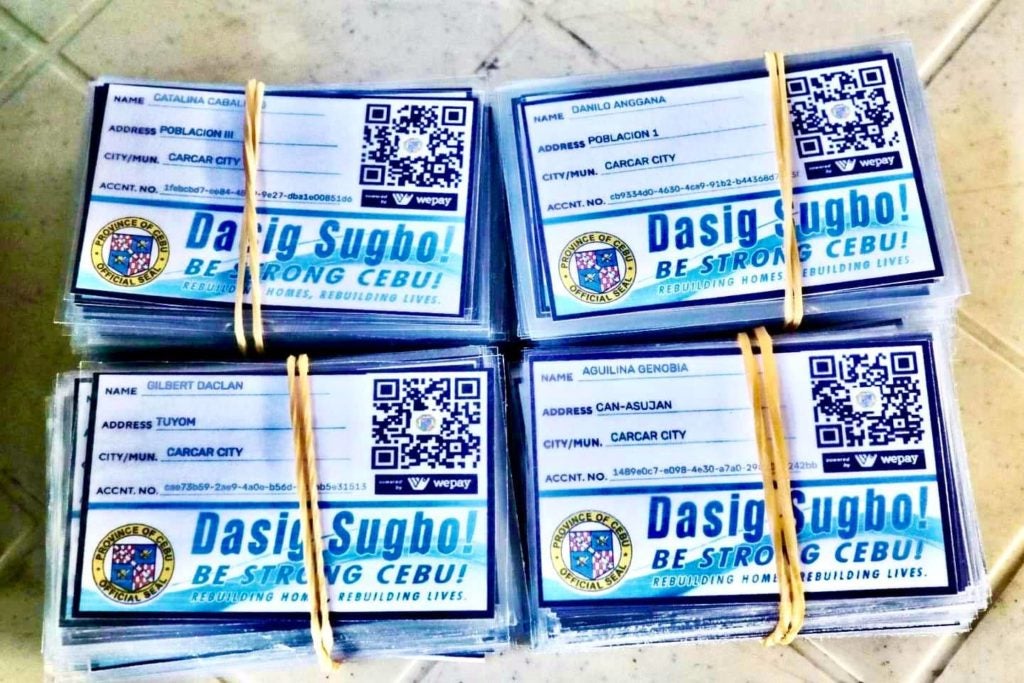 The Dasig Sugbo cards that were distributed to victims of Typhoon Odette in Cebu province. | Photo from Sugbo News

CEBU CITY, Philippines – Long queues of shoppers in front of major supermarkets were common sights during crisis, particularly during COVID-19 lockdowns and the aftermath of Typhoon Odette (international name: Rai).

This is why it came as a surprise to some when they saw long lines outside supermarkets in Cebu City lately.

Individuals queueing in some supermarket chains in downtown Cebu City were actually beneficiaries of the Capitol’s Dasig Sugbo cards.

The long queue of people outside supermarkets began sometime between March 1 and March 3, just days after the Capitol distributed the second tranche of its Dasig Sugbo cards.

Photos and videos of the scene baffled many, including netizens. Rumors and unofficial reports, such as the Capitol’s alleged failure to pay supermarkets, spread like wildfire on social media.

Why were shoppers, most of whom came from different parts of the province, lining up before supermarkets as early as dawn? And how true were the rumors flying around?

Dasig Sugbo is the name of the rebuilding and rehabilitation assistance program for Odette-stricken residents in the province.

The Capitol allocated a total of P2 billion to fund post-Odette recovery efforts, including Dasig Sugbo.

But instead of usually handing out cash directly to recipients, the aid is contained in a quick-response (QR) code-equipped card.

In this manner, beneficiaries will only get to spend the funds on essential items such as groceries, appliances, and rebuilding materials from partner merchants and suppliers by scanning the coupon cards.

When reporters visited a supermarket in Colon Street on Monday, March 7, the long lines of Dasig Sugbo beneficiaries were still there.

Among the individuals lining up to buy around P3,000 worth of groceries was Ella (not her real name) who came from Minglanilla town.

Ella, who requested to hide her real identity, said she decided to travel all the way to Cebu City, which is approximately 19 kilometers north of Minglanilla, when supermarkets in her hometown refused to accept Dasig Sugbo beneficiaries like her.

She was already queueing outside a store along Colon Street as early as 6 a.m.

She also said representatives of the supermarkets told her, and the rest of those who queued to buy groceries, that the Capitol allegedly was not yet able to pay them.

The first wave of card distribution happened last January, in which no less than 90,000 beneficiaries received assistance of up to P8,000 from the provincial government.

Odette survivors whose houses were completely destroyed were given up to P8,000 worth of assistance.

The second tranche of distribution involved more than 100,000 recipients whose houses were partially damaged. Depending on the extent of the damages, they can receive either P5,000 or P3,000 in aid.

Gov. Gwendolyn Garcia on Monday, March 7, finally put an end to speculations when she admitted that the Capitol incurred delays in processing the payments for their partner supermarkets.

“The trouble was when they submitted the billings hinay kaayo pag process sa gisubmitan,” Garcia told reporters in an interview.

The governor said the payables even reached up to P85 million, prompting her to call a meeting with managers from their partner supermarkets last March 3.

Nevertheless, Garcia assured that they are fixing the issues surrounding the Dasig Sugbo cards.

She also said that the Capitol already issued cheques to the supermarkets accepting Dasig Sugbo beneficiaries.

The Capitol clarified that each recipient of the Dasig Sugbo cards has up to three months to spend the amount given to them, and not a week.

Garcia confirmed that she, too, received reports that Dasig Sugbo cards will expire within a week upon issuance, a “false information” which she believed may have led beneficiaries to flock to supermarkets.

“Kay nahadlok na maexpire kuno within the week. daw lagi. No, I already said, we should give a time limit. So, magpadala ta ug advisory saying these cards should be used within three months,” she pointed out.

The central and southern portions of Cebu were badly hit by Odette last December 16, 2021.

The Capitol decided to shell out P2 billion to fund recovery and rehabilitation initiatives such as Dasig Sugbo.

For Garcia, the issues experienced by Dasig Sugbo were just “bumps” considering it was their first time to try a new arrangement in handing out assistance to typhoon victims.

“These are the bumps that we have to encounter. Nothing is ever perfect in this world. Bottom line is, we are trying to help as much as we can,” she said.

Read Next
Not physically and financially healthy enough? You only need one plan to boost both