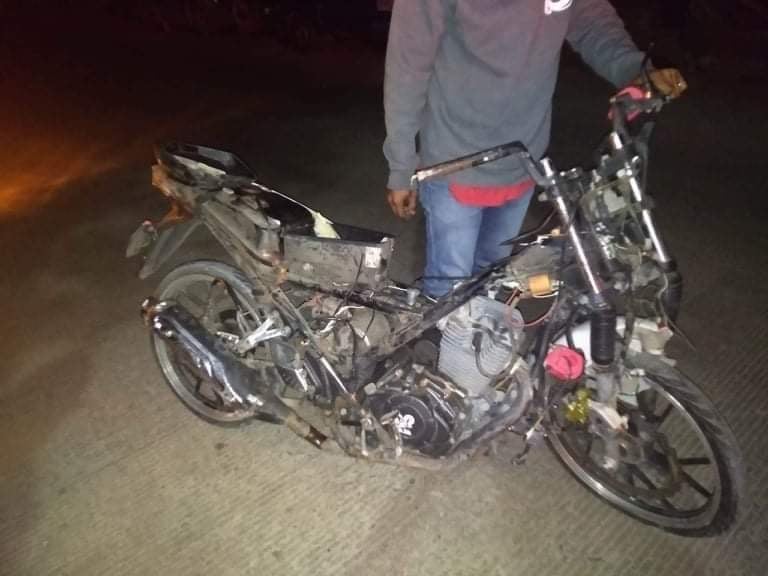 Talisay accident: The 15-year-old boy, who died in the fatal collision with a car, drove this motorcycle which crashed into a car Saturday evening, March 19 on.  | Photo courtesy of CT-TODA

CEBU CITY, Philippines — Drivers are reminded not to drive when they have drank liquor or alcoholic drinks to avoid accidents.

Jonathan Tumulak, City of Talisay Traffic Operations and Development Authority (CT-TODA) chief, said this after the initial police investigation showed that both drivers in the fatal accident on March 19, in Barangay Lagtang, Talisay City, were driving under the influence of liquor or had drank liquor or alcoholic drinks or were “intoxicated.”

Tumulak was referring to the 15-year-old motorcycle rider who died in the collision with a car, which was driven by a 33-year-old Barangay Biasong, Talisay City resident.

(The driver, who died, had drank liquor and so did the driver of the car.)

Aside from that, he said that the motorcycle rider, who died, was a minor and had no driver’s license because he was a minor.

Tumulak said that investigation showed that the motorcycle driven by the minor, who also had a 16-year-old back rider, suddenly changed lanes and crashed into the car on the opposite lane.

He also said that the 15-year-old was ran over by the car after he was thrown into the path of the car when his motorcycle hit the front of the car.

His 16-year-old backrider survived the accident and was recuperating from his injuries and bruises at the hospital.

Although the police had not yet revealed, who was at fault in the accident, which happened at past 9 p.m. last March 19, initial investigation showed that the motorcycle suddenly switched lanes and crashed into the car, which was in its right lane.

(This is what I can say for now. This is still under investigation because based on what was seen at the accident site, the car was in the right lane, and the police investigation further showed that both parties, had drank liquor or alcoholic drinks.)

With this initial investigation results alone, he said that the driver of the car, Paul Dyke Villagonzalo, would be facing initial charges of drinking under the influence of liquor.

With minors being involved in the accident, Tumulak further reminded parents about the curfew for minors.

(I am calling on parents to also monitor their children.)

The curfew in the city has already been lifted but this only covers adults, the curfew on minors is still in effect, said Tumulak.

(They should follow this rule because this is a law. And if you had drank alcoholic drinks, don’t drive.)