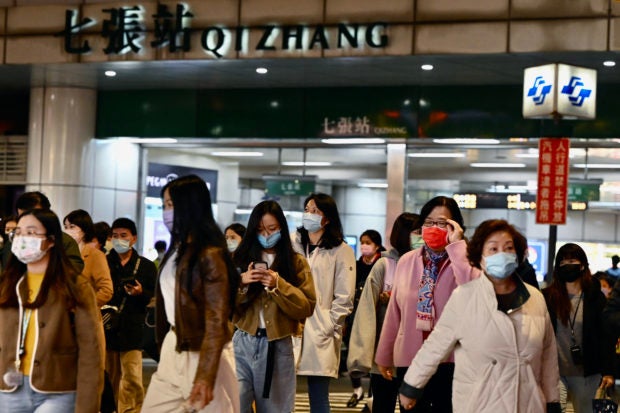 Commuters exit a Mass Rapid Transport (MRT) station in Xindian in New Taipei City on January 3, 2022, after a strong earthquake struck off the coast of eastern Taiwan with shaking felt in the capital Taipei. AFP FILE PHOTO

TAIPEI — A magnitude 6.7 earthquake struck off the coast of Taiwan early Wednesday, rattling buildings and rousing people from their sleep but with no immediate reports of injuries or major damage.

Taiwan is regularly hit by earthquakes, as the island lies near the junction of two tectonic plates.

Taiwan does not issue tsunami warnings unless a quake registers at more than magnitude 7.0.

The US Geological Survey downgraded this temblor from an initial estimate of magnitude 6.9 down to 6.6, then back up to 6.7.

It also revised the depth from an initial 10 kilometers (6 miles) to 24 km.

The quake hit off Taiwan’s east coast but was felt over much of the island.

Local news channel TVBS reported that people in the eastern city of Hualien — which saw a deadly quake in 2018 — fled to the streets from a 12th floor building.

In Taiwan’s southern Kaohsiung city — the island’s third most populous — Mayor Chen Chi-mai posted on Facebook that the epicentre was in the sea off the coast of Hualien.

“So far there is no damage,” he said.

Twitter and Facebook lit up with people posting their reactions on being woken up by the quake, with some showing videos of their ceiling lamps swaying.

“The chandelier on my ceiling shook for more than three minutes and didn’t stop,” local reporter Chao Li wrote on Facebook.

“It’s shaking so much, it scares people to death,” he said in an accompanying video.

The Hualien county government said the quake had occurred near their city, which is usually a tourist draw with its beaches and scenic hikes.

“The quake was felt all over Taiwan,” the county government said on its official Facebook page.

“Please do not panic if there are aftershocks and we urge the residents be prepared for disaster prevention,” it added.

Taiwan’s Central Weather Bureau said an initial quake of 5.4-magnitude had occurred at 1:06 am.

It was followed by the magnitude 6.6 quake at 1:41 am, and two minutes later came a 6.1-magnitude aftershock, the bureau reported.

Some earthquakes of 6.0 or more can prove deadly, although much depends on where the quake strikes and at what depth.

But the USGS gave a “green” ranking to the threat posed by the latest quake, predicting a low likelihood of either casualties or damage.

The last time Taiwan experienced a quake of a similar magnitude was in January, when a 6.2 quake hit its east coast. But there were no reports of widespread damage or injuries.