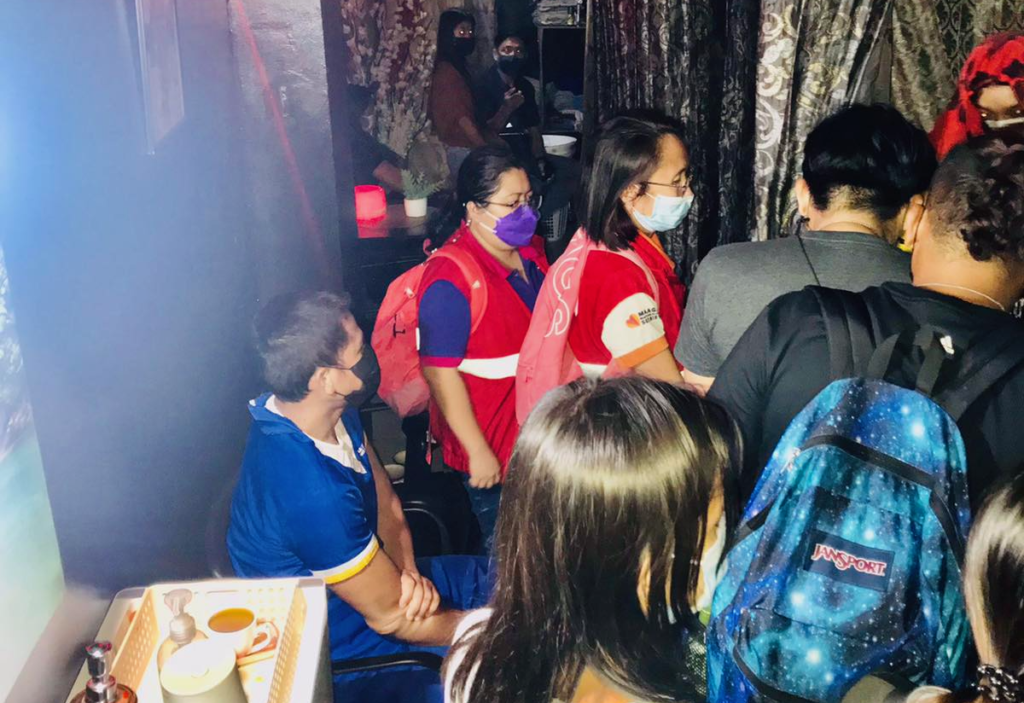 A total of four individuals, including a massage and spa proprietor, are now facing charges of human trafficking as they were accused of forcing masseurs and therapists to do “extra service.” The suspects were arrested by agents from NBI-7 and IACAT-7 on March 31, 2022, during simultaneous anti-human trafficking operations in Cebu City and Talisay City. | Photos courtesy of NBI-7

CEBU CITY, Philippines – At least four individuals, including the owner and a manager of a massage and spa chain in Metro Cebu, are now facing human trafficking charges.

This after the National Bureau of Investigation in Central Visayas (NBI-7) recently conducted simultaneous anti-human trafficking operations with the regional Inter-Agency Council Against Trafficking (IACAT-7) in Cebu City and Talisay City.

During a press conference on Tuesday, April 5, NBI-7 announced that they rescued a total of 11 masseurs and therapists, and arrested four suspects following the operations.

Law enforcers on March 31 raided the branches of McShield Spa Massage in Barangay Tabunok, Talisay and in Barangay Labangon, Cebu City after they received reports that the establishment allegedly forced their employees to do “extra-service.”

Lawyer Renan Augustus Oliva, director of NBI-7, said the masseurs and therapists were required to do lewd acts upon their clients’ requests.

“Otherwise, they (management) would threaten them to be assigned in a branch they liked the least or they will be heavily admonished,” said Oliva.

Among the evidence agents gathered from the massage parlors, which began operations last May 2021, included two different sets of “menu.”

One consisted of the spa’s regular services while the other, hidden from plain sight, will only be provided to patrons who want to avail of the “extra services.”

“They are also using Facebook as a platform for their operations as well as tablets (devices) for the customers to choose which therapists they would like,” Oliva said.

Citing testimonial evidence from the rescued victims, the NBI-7’s top official also said that applicants would have to perform “lingam massage” on the owner himself as part of their pre-employment requirements.

In the meantime, authorities have turned over the victims to the Department of Social Welfare and Development in Central Visayas (DSWD-7) for counselling.

The suspects, on the other hand, have been charged with violating Expanded Anti-Trafficking in Persons Act of 2021 last April 4.

“What the suspects did was exploitation through prostitution, and in the law, that is already human trafficking,” Oliva pointed out.

They are currently under the custody of NBI-7. When reporters visited their detention cell, they refused to give their comments.

Meanwhile, Oliva warned other establishments in Central Visayas engaged in human trafficking activities that they will face the same fate.

“This is an ongoing operation… As you can recall, we already closed down two massage and spa parlors in Mandaue recently… This will not be the last,” he added.

NBI-7 to ‘wire thieves’: You will be arrested, jailed, fined