NBI-7 to ‘wire thieves’: You will be arrested, jailed, fined 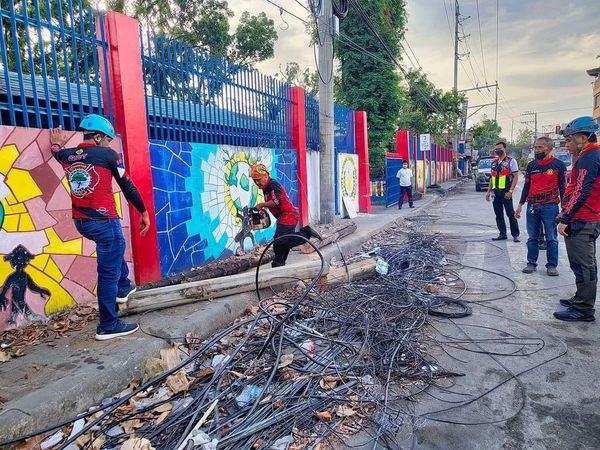 CEBU CITY, Philippines — The National Bureau of Investigation in Central Visayas (NBI-7) warns individuals, who steal and sell electrical wires that were destroyed by Typhoon Odette in December 2021, that when they will be caught they will be arrested, jailed and fined.

Lawyer Renna Oliva, NBI-7 regional director, said that those who would be caught doing this could possibly be charged with violating Anti Pilferage Law of Electricity and Theft of Electrical Transmission Lines/Materials Act of 1994 or Republic Act 7832.

Oliva said if proven guilty of the crime then they would be jailed and would be made to pay a fine ranging from P10,000 to P20,000.

Oliva said they made the warning to those “wire thieves” because the power utilities had assessed that these had contributed to the delay of power restoration of other areas in Cebu.

Aside from that, Oliva also warned those, who would buy these stolen wires that they would also be arrested if caught doing this and would be charged for violation of the Anti-fencing Law.

(If we can pinpoint them even those who would buy the bronze, we will charge them with the Anti-Fencing Law. It is the property of the company, that is stolen property, getting those from a fallen pole is not a waiver that it is now yours … so this is a warning to them.)

Oliva emphasized that the electrical wires were owned by Visayan Electric and selling and buying those would be an act of crime.

This Sunday morning, January 30, Naga City in southern Cebu, policemen arrested 14 individuals, who were caught allegedly “cutting,” “taking,” and “stealing” assorted bronze electrical wires at the vessel, MV Mary the Queen, which was damaged by Typhoon Odette and was moored near the seashore of Sitio Lawis, Barangay Langtad.

Police said they conducted the operation after receiving a report about the theft of wires from the ship and that this had been happening for a few days already.

According to the police report, that a few of those arrested tried to flee and hide in different areas of the vessel.

But the police managed to arrest all 14 individuals who were responsible for allegedly stealing the electric wires of the ship.

All arrested individuals were detained at the Naga Police Station pending the filing of charges.

Police Major Kenneth Paul Albotra, Carbon Police station chief, said that during those times when power in the area was still being restored, they received several reports of theft cases involving the stealing of electric wires.

Albotra said that Visayan Electric also told them that the stealing of these wires contributed to the delayed restoration of the power supply.

Read Next
Talisay cop chief to other victims: Press charges against Kenny Flashlight