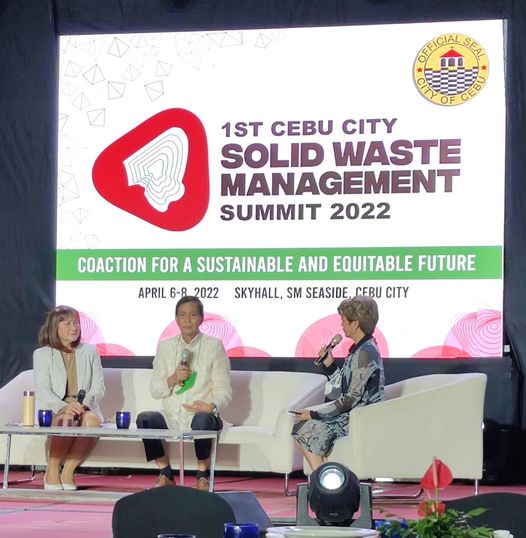 Mayor Mike Rama shares his vision for the City and the legacy he wants to leave behind, in the interview segment during the opening of the Solid Waste Management (SWM) Summit held at SM Seaside City Cebu. | Photo Courtesy of Cebu City PIO

Mayor Michael Rama opened the summit at the SM Seaside Sky Hall on April 6, 2022, which brings together the environment agencies, groups, and stakeholders for a forum to discuss the city’s garbage management.

Rama said that it is the ultimate public service to admit that there is a problem, in this case, garbage, and to find a long-term solution.

“Is garbage a problem? Yes, it is the truth. Truth hurts. Is it fair to address the issue of solid waste management? Yes. I’ve been thinking for a long time to hold this summit. This is not for me alone, this is for your family, this is for my family,” he said.

The goal of the summit is to bring great minds together from different sectors to provide the city government with the tools to solve the perennial garbage problem.

One of the city’s major problems is the massive garbage production costing the city millions in collection and disposal.

The summit aims to help create a system to reduce garbage production from the roots and establish a better system of collection and disposal.

The Environment Management Bureau (EMB) also discussed the laws and general concerns of SWM in the Philippines.

One of the major discussions the summit hopes to tackle is the pros and cons of a Waste to Energy (WTE) plant in Cebu City especially since the city will be taking up a Joint Venture Agreement for a WTE facility with New Sky Energy Philippines.

The city government also plans to craft the 10-year SWM Plan so that its deficiencies over the matter will be resolved after it was flagged by the Commission on Audit in 2021.

The Summit is part of the Mayor’s “21 gun salute” programs, which continue the legacy of the late Mayor Edgardo Labella to ensure that his projects will be completed.    /rcg