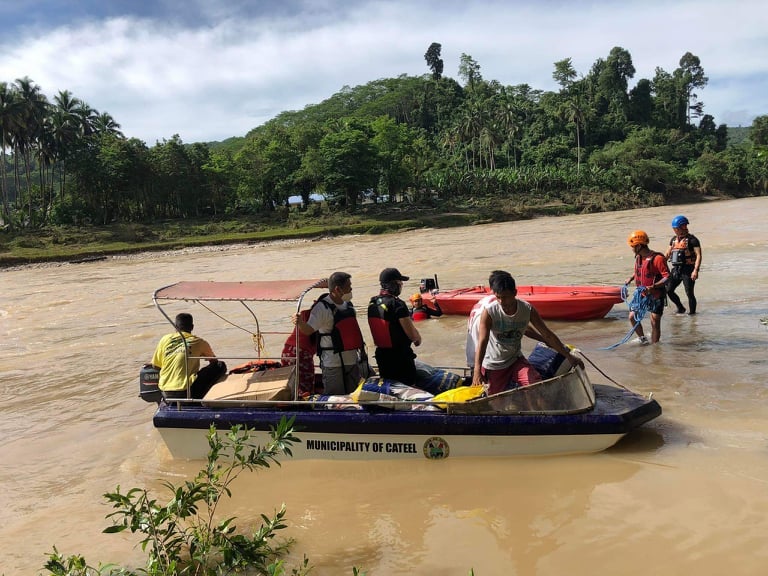 RELIEF Responders bring relief supplies to Barangay Maglahus in Cateel, Davao Oriental, on Wednesday. The village was cut off from the rest of the town after a bridge was damaged by floodwaters — PHOTO COURTESY OF DAVAO ORIENTAL PROVINCIAL INFORMATION OFFICE

DAVAO CITY — Davao de Oro has been placed under a state of calamity as the province deals with severe floods that have killed at least two residents and displaced 4,600 families.

The provincial government on Friday confirmed that two people drowned while another has been missing since Tuesday as a result of the floods that hit the province and some parts of the Davao region due to days of rains spawned by a low-pressure area (LPA).

The state weather bureau said it could not rule out that the LPA might develop into a tropical depression, as it continued to bring heavy rainfall in many parts of Mindanao and the Visayas.

The LPA was embedded along the Intertropical Convergence Zone affecting the Visayas and Mindanao and would bring moderate to heavy rains over the provinces of Surigao del Norte, Agusan del Norte, the northern portion of Surigao del Sur and Dinagat Islands in Mindanao; Eastern Visayas; and Catanduanes, Albay and Sorsogon in the Bicol region, the Philippine Atmospheric, Geophysical and Astronomical Services Administration said in a bulletin at 10 a.m. on Friday.

While the report did not mention when the two fatalities were reported missing, it pointed out that the first body was found on Wednesday in the morning, while the other body was found the next day.

In the case of Dumaig, he and another person, Samuel Basanez, were carried by the strong current of the river at 5 p.m. on Tuesday. Basanez was rescued four hours later in Pasian, the village next to where they were reported missing. He returned home to Barangay Union, also in Monkayo, on Wednesday morning.

The PDRRMO report added that the floods and landslides that hit the five towns of Davao de Oro in the last four days displaced 4,605 families composed of 9,628 individuals.

The PDRRMO also monitored six landslides and that although some roads had not been immediately passable, these were cleared by Friday.

In Davao Oriental, the provincial government reported that the Department of Public Works and Highways has started repairing roads, including the water supply system in Barangay Maglahus in Cateel, as the town was battered by heavy floods.

In the report, District Engineer Cirilo Lasaca said his office would prioritize the water system of Maglahus as the system collapsed together with the bridge connecting it to the rest of the town.

Lasaca said the water supply would be restored by Sunday as the repair team would need to install new pipes, hoses and other works necessary when the old water pipes collapsed with the bridge.