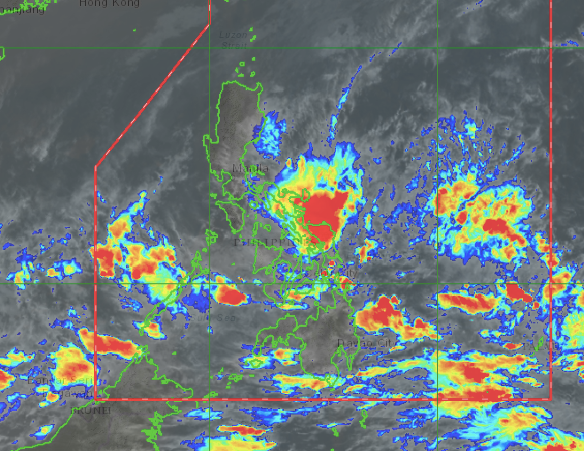 MANILA, Philippines — The low pressure area (LPA) outside the Philippine area of responsibility (PAR) has since intensified into a tropical depression that could enter the country’s territory by Monday, the Philippine Atmospheric Geophysical and Astronomical Services Administration (Pagasa) reported on Thursday, April 7, 2022.

Pagasa weather specialist Grace Castañeda said the tropical depression was spotted  2,435 kilometers east of Mindanao, moving west northwest at 10 kilometers per hour (kph) with maximum sustained winds of 55 kph and gustiness of up to 70 kph.

(The tropical depression may enter the Philippine area of responsibility by Monday.)

Most parts of the country will experience overcast skies and rainy weather on Thursday due to another LPA embedded along the intertropical convergence zone (ITCZ) and the northeasterly surface windflow.

The LPA detected 130 kilometers east of Hinatuan, Surigao del Sur, along with the ITCZ, is expected to bring cloudy skies with scattered rain showers and thunderstorms to the Mimaropa (Occidental Mindoro, Oriental Mindoro,  Marinduque, Romblon, Palawan) and Bicol regions, Quezon province, and the entire Visayas and Mindanao.

Castañeda said the LPA has a low chance of becoming a typhoon.

Landslides and flash floods, however, are possible, Pagasa warned.

(It has a low chance of becoming a typhoon in the next 24 hours.)

The northeasterly wind flow is also affecting many parts of Luzon, bringing cloudy skies with rains to Cagayan Valley, Apayao, Kalinga, Ifugao, Mountain Province and Aurora, while the Ilocos region, Abra, and Benguet are expected to have partly cloudy to cloudy skies with isolated rain showers and thunderstorms.

Metro Manila and the rest of Luzon will have partly cloudy to cloudy skies with isolated rain showers and thunderstorms due to localized thunderstorms.

Meanwhile, Pagasa raised a gale warning over the seaboards of Batanes, Cagayan including Babuyan Islands and Ilocos Norte due the northeasterly surface windflow.

Read Next
Cebuana beauties are among MUPH 32 finalists