Only vaccinated persons can enter places of worship – Año 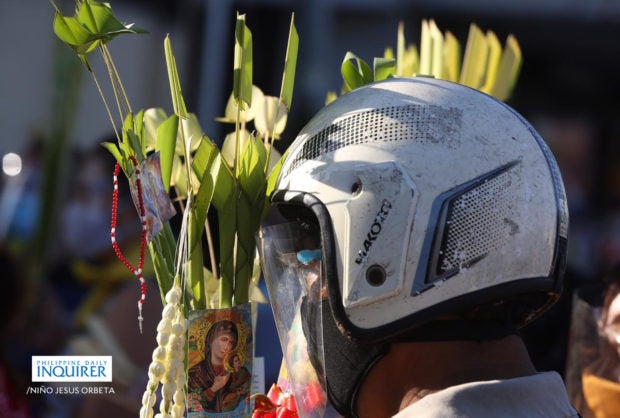 A man carries palm fronds on Palm Sunday at the National Shrine of Our Mother of Perpetual Help in Baclaran, Paranaque City, on March 28, 2021. Palm Sunday signals the start of Holy Week, Christianity’s holiest period that is marked by prayer, penitence and reflection on the ultimate sacrifice of Jesus. (File photo by NIÑO JESUS ORBETA / Philippine Daily Inquirer)

MANILA, Philippines — Only individuals fully vaccinated against COVID-19 will be allowed to enter the places of worship, Interior Secretary Eduardo Año said on Monday during the taped weekly “Talk to the People” briefing of President Rodrigo Duterte that aired Monday night.

That is clearly the rule of the Inter-Agency Task Force for the Management of Emerging Infectious Diseases (IATF) regardless of the COVID-19 alert level, Año said.

He made the reminder as Muslims were in the middle of marking Ramadan and Catholics the Holy Week.

“All of our religious groups follow [the rule],” he said.

The rule will also be implemented in mosques in the Bangsamoro Autonomous Region in Muslim Mindanao (BARMM), he added.

According to Año, the Philippine National Police (PNP), which operates under the Department of the Interior and Local Government (DILG), has been directed to coordinate with BARMM officials for the implementation of the rule.

The BARMM has been an area of concern in the fight against the COVID-19 pandemic, as only 20 percent of the target population there has been vaccinated against COVID-19, according to Secretary Carlito Galvez Jr., the national vaccine manager.

The target population in the BARMM is 60 percent, or 1.5 million individuals, Galvez said.

Earlier in the briefing, Duterte said Galvez would visit the region, along with the provinces of Cotabato and Sultan Kudarat, to convince officials there about the importance of getting vaccinated.

Duterte remarked about the objection that a vaccine would get something foreign inside people.

“Of course, it is a foreign body that would enter your body. But that is to warn you, your antibodies — to wake them up and alert them that there’s an enemy coming,” he said.

“So tomorrow Secretary Galvez will go there,” Duterte said. “We’ll talk to the BARMM. And if you, BARMM officials, are listening: You are part of the government. That’s what you wanted — for us to postpone the elections. So you are bound by what the government says.”

After the COVID-19 surge last January due to the Omicron variant, COVID-19 cases steadily decreased.  However, granular lockdowns were still implemented to ensure that infections would not spread more.

Just recently, Galvez and other health authorities warned that mini surges might be possible in BARMM due to the low vaccine turnout.