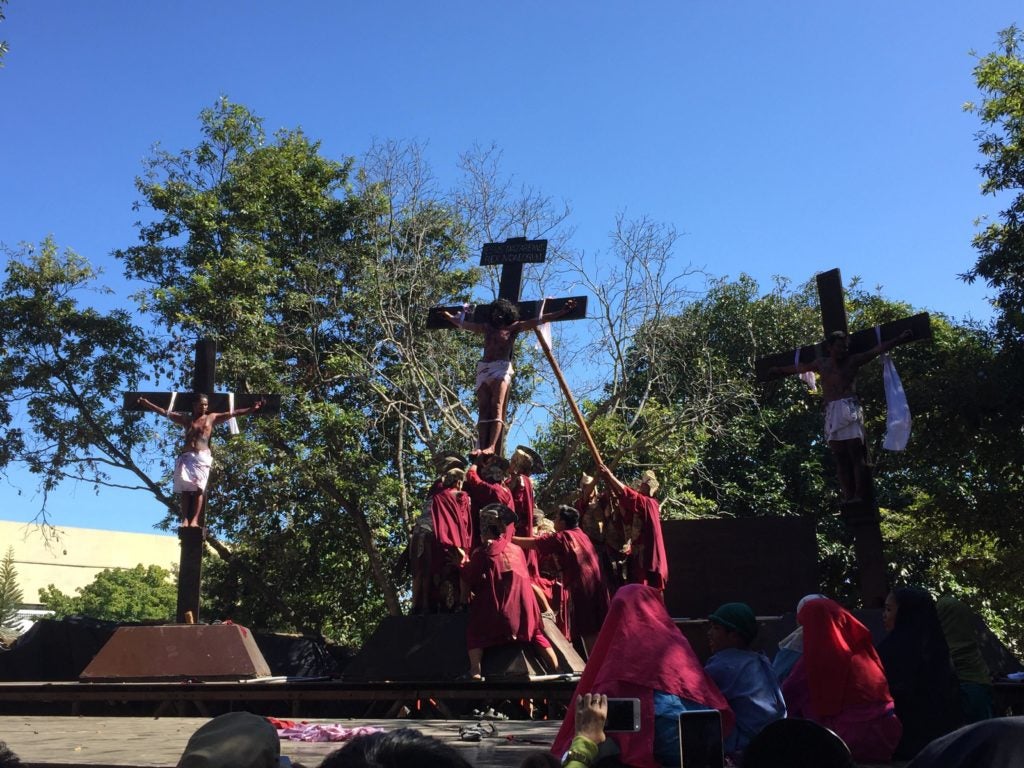 Jesus Christ is crucified in a scene of the Buhing Kalbaryo street play in Cebu City on Good Friday. |Delta Dyrecka Letigio

CEBU CITY, Philippines — The 25th edition of the Buhing Kalbaryo expects hundreds or even thousands of people to join the street play.

The Buhing Kalbaryo is a form of Pasyon or Senakulo that incorporates the Stations of the Cross or Via Crucis as an integral part of the play.

Elmer “Jojo” Labella, the consultant for this year’s play, said that apart from the more than 100 casts and crew, the people that usually watch and join the play reach 2,000 to 3,000 in the past years.

They expect roughly the same or fewer people especially since the city has just recently eased restrictions and many people may still be uncomfortable going out.

Ten stations have been put up along V. Rama Avenue at certain points including Queensland, B. Rodriguez corner, Royal Oaks International School, Guadalupe Barangay Hall, Crown Regency, and outside Espina Compound, among others.

Mayor Michael Rama said that there will be no vaccination requirement to watch the play since it is held outdoors.

However, all viewers must wear face masks and must maintain the other health protocols as much as possible.

“We should be avoiding that we will be a part of the problem. Security, safety, and protocol will be set in place labi na sa viewers. There should be signages for social distancing,” said the mayor.

The Buhing Kalbaryo will start at 10 a.m. at the San Nicolas Parish Church in Barangay San Nicolas.

By noon, the play would have moved to the streets through the Stations of the Cross route.

Before 3 p.m. the play would have reached Espina Compound for the final act, the crucifixion of Jesus and two thieves.

The play would be completed around or shortly after 3 p.m.

The support of the public also helped keep the play going despite the hurdles it has encountered through different administrations.

Now that the city has moved on from the pandemic, Rama urged the Cebuanos to watch and join the play on Good Friday to relive the traditional Holy Week activities.    /rcg

PAMALANDONG: A Virtual Visita Iglesia and Via Crucis