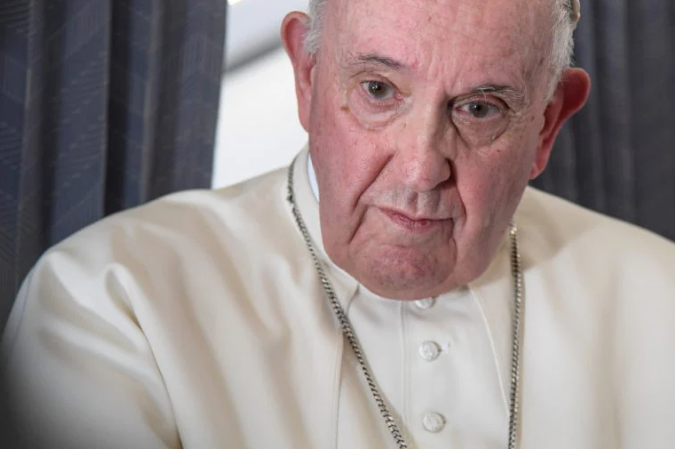 FILE PHOTO: Pope Francis looks on as he holds a news conference aboard a plane on his flight back to Rome after visiting Cyprus and Greece, on December 6, 2021. Alessandro Di Meo/Pool via REUTERS

MANILA, Philippines — Pope Francis has expressed his solidarity and sympathy to the victims of Tropical Depression Agaton (international name: Megi) that lashed parts of Visayas and Mindanao early this week.

The Pope’s sentiment was conveyed by Cardinal Pietro Parolin, Vatican’s Secretary of State, in a letter dated April 14 to Apostolic Nuncio to the Philippines Archbishop Charles Brown.

“Having been informed of the recent loss of life and destruction caused by typhoon Megi, His Holiness Pope Francis wishes to express his solidarity with all those suffering in the wake of the storm,” Parolin’s letter reads.

“He also offered the assurance of prayers for the dead, injured, and displaced as well as those engaged in recovery efforts. As a sign of his spiritual closeness, His Holiness willingly invokes upon all the Filipino people God’s blessings of strength and peace,” it further states.

The National Disaster Risk Reduction and Management Council’s report indicated that the death toll due to Agaton reached 137 as of Friday, mainly from landslides and floods. Agaton was the first typhoon to hit the Philippines this year.

Most of the fatalities were logged in Eastern and Western Visayas as these were the areas that have largely experienced the wrath of Agaton.

The tropical depression also left immense catastrophe on the region’s infrastructure and agriculture.

Agaton weakened into a low-pressure area on Tuesday, April 12, and completely dissipated the following day.

Read Next
Andi Eigenmann’s son Koa learns to surf: ‘Of course, this guy had to have a go at it too!’