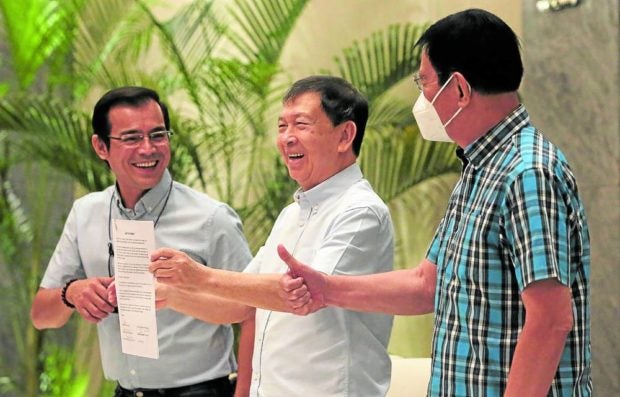 MANILA, Philippines — It had the anticipation of a major event: Three presidential candidates gathered in a hotel to make an explosive announcement as the election campaign headed toward the homestretch.

But instead the Easter Sunday press conference led by Sen. Panfilo Lacson, Manila Mayor Francisco “Isko Moreno” Domagoso and former Defense Secretary Norberto Gonzales became an occasion for badmouthing Vice President Leni Robredo — or what analysts saw as their attempt to undermine the momentum of her campaign.

It did not help that some of the questions from the media suggested the presence of trolls among their ranks, with one reporter attributing to Robredo a supposed remark that there would be chaos if she did not win. This prompted a ready critical response by Domagoso, whereas Lacson inquired first if she had indeed said that, before attacking Robredo just the same.

Both candidates also revived anew their impression of bad faith on Robredo’s part, when she endeavored to unify the opposition before finally throwing her hat in the presidential arena.

Then they criticized the shift among erstwhile supporters toward Robredo as a mere projection by her camp that she was gaining a wider following.

But political scientist Aries Arugay of the University of the Philippines (UP) said he wondered why the two were still smarting from that development.

“It’s confusing how ultrasensitive they are,” he said. “It’s as if they’re new in politics, like it’s the first time they’re running.”

Arugay said the press conference was an “undue and unnecessary distraction—no new information, all rehashed.”

To be sure, there were words of caution as well about Ferdinand “Bongbong” Marcos Jr., with Lacson and Gonzales warning against his family’s return to power—given that the son and namesake of the late dictator remains the front-runner in the surveys.

But for Jean Encinas Franco, also a political scientist at UP, the tirades against Robredo eclipsed the expressed concern about a Marcos comeback.

“I don’t know if they’re aware that their criticisms against Leni may actually benefit Marcos Jr. instead,” she said.

In a statement following the press conference, Domagoso’s former supporters from the group IM Pilipinas said, “Unwittingly, with your rhetoric, you have become the greatest allies of Marcos in this elections [sic].”

They added, “[E]verybody knows, except probably the three of you, that we needed a unified opposition to beat a Marcos.”

For Arugay, Domagoso could have used that press conference to renew his attacks on Marcos Jr. and use his “trump card”—the issue over the Marcos family’s unsettled P203-billion estate tax.

“But he did not use that … it was also an uneven attack, [because he] did not give equal attention to the flaws of BBM,” Arugay said, referring to Marcos Jr.’s initials.

Domagoso’s supporters also chided him for “resorting to vindictive machismo” in his remarks against Robredo.

Indeed, it was clear that the press conference was not well-received, especially among women, Franco noted.

“The optics is there for all to see and a lot of women will really see through it,” she said. “Maybe not everyone will see it right away as misogynist, but they will all [realize] that the three ganged up on Leni.”

“In fact, the press con may actually backfire because it came out to me, as a woman, that these male candidates are fortifying the glass ceiling just so a woman candidate would not be able to break it,” she added.

“How will they convert women voters to their tribe if they express this kind of misogyny? If anything, she might instead get more sympathy,” said Arugay, who pointed out Robredo’s strong voter base among women.

All told, “I don’t think this was a mission accomplished [for the three candidates],” he said. “[T]his would not benefit the campaigns of anybody in that press conference.”

He added, “Domagoso is [becoming] desperate. His campaign has lost its footing and orientation and it is shooting in all directions, and unfortunately this time, it shot itself in the foot.”

Robredo unfazed by rivals’ call for her to quit presidential race