MANDAUE CITY, Cebu — Supporters of Vice President Leni Robredo and Senator Francis Pangilinan are urging other kakampinks to join them for their Cebu grand rally scheduled on April 21.

The gathering called “CEBOOM! Cebu Grand People’s Rally” is scheduled at 2 p.m. in a vacant lot at the North Reclamation Area in Mandaue City. 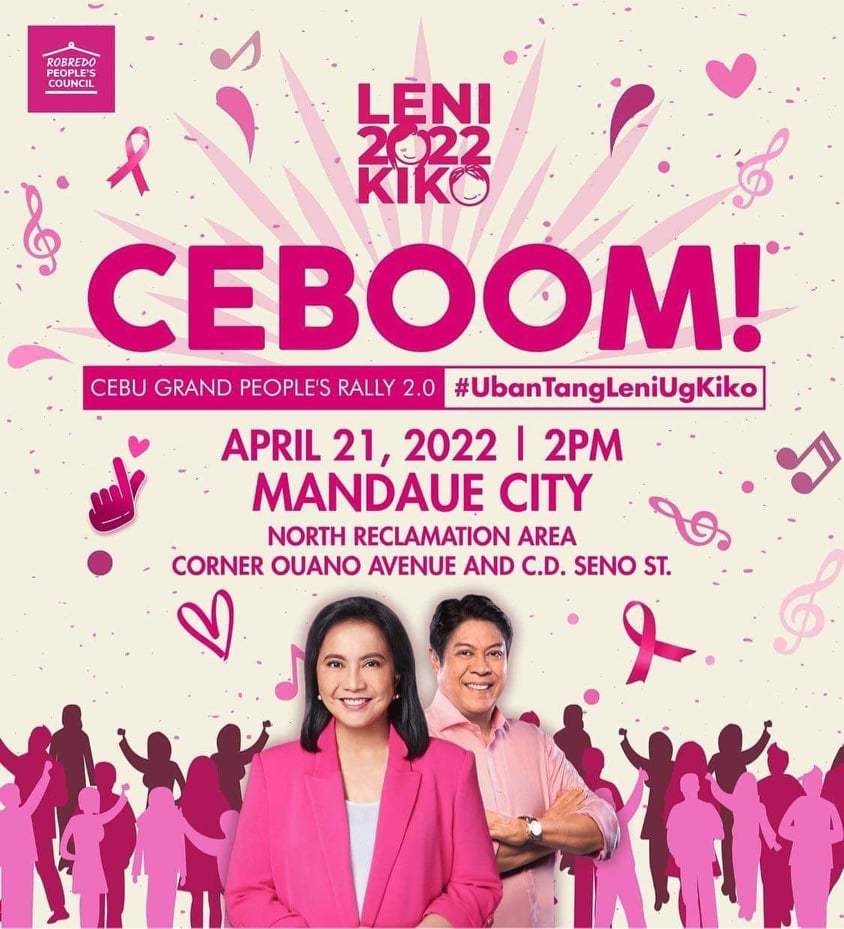 Officials of the Leni-Ace-Junjun Movement, said in a statement, that they were taking the initiative to prepare the north delegation to the ‘grand pink wave’ in Mandaue City.

They added that during a recent meeting, “movement supporters decided to mass up outside the Cebu International Convention Center (CICC) before joining the grand rally of Vice President Robredo and Sen. Kiko Pangilinan.”

“Mag-uban kita on the 21st, my fellow Sugbuanons! See you all!’ he said.

(We’ll come together on the 21st, my fellow Cebuanos! See you all!)

“Leni volunteers in Danao and neighboring towns are expected to converge in this capital of the so-called Durano country for a rally with Robredo and her runningmate Kiko Pangilinan,” the statement read.

The gathering of the kakampinks in Cebu is scheduled four days after the BBM-Sara tandem will be having their grand rally at the City de Mari at the South Road Properties on Monday, April 18.

Meanwhile, Lawyer Francisco Amit, spokesperson of the Leni-Ace-Junjun Movement, said the endorsement that 1Cebu gave to the BBM-Sara tandem did not come as a surprise.

(We knew that Gwen only slowly dragged out her card. We already knew that the transaction was long sealed.)

Amit said it was also good to note that Governor Garcia had finally found a place “where she rightfully belongs.”