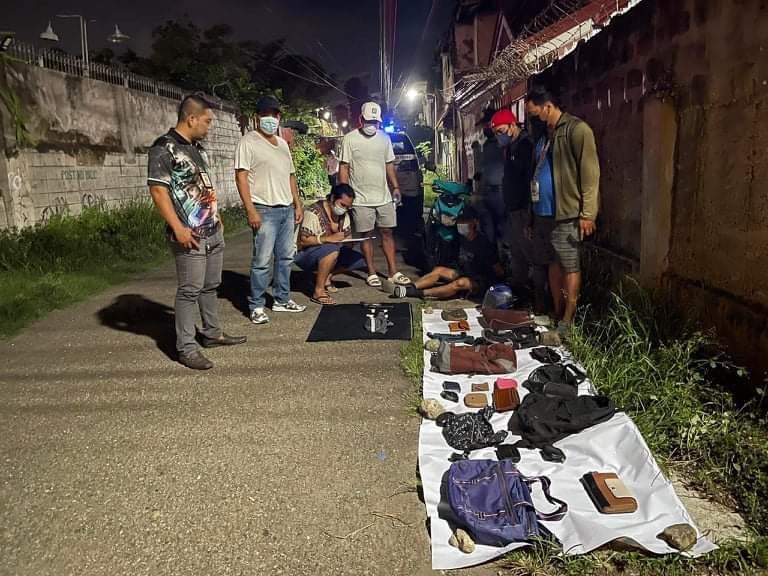 Police check on the recovered items made up of several bags and wallets from suspect Allan Perales, who was allegedly a Bukas Kotse thief. | Contributed photo via Pegeen Maisie Sararaña

CEBU CITY, Philippines — Police are calling on the public especially victims of “Basag Kotse” incidents in the cities of Mandaue and Cebu to visit the Mambaling Police Station and check if the bags and wallets recovered from an arrested suspect of the crime are theirs.

Policemen of the Mambaling Police Station on Sunday evening, April 17, who responded to an armed person alarm, caught Perales with a Frontier revolver and two sachets of suspected shabu.

Aside from that, they also recovered several bags and wallets from the suspect’s motorcycle, which was also confiscated by the police.

A further background check on Perales showed that he was linked as a suspect in previous “Basag Kotse” incidents in Cebu City.

Basag Kotse is a modus operandi of thieves where they break the windshield or windows of a parked vehicle to steal valuables inside it.

The police officer, however, could not tell yet when these incidents were allegedly committed as they were still continuing their investigation on the suspect.

As of today, April 18, based on their blotter entries, Devaras said that five to six individuals had reported that they were victimized by Basag Kotse thieves.

He also said that they were still checking with other police stations outside the city to find out if Perales also operated outside the two cities.

With Perales arrest, Devaras reminds the public to always park their vehicles in a safe parking area and not leave valuables them.

“We are appealing to the citizens if ever they park a car, park in a safe area, don’t leave valuables didto (there),” he said.

(Because these criminals, they would find opportunities (to steal). So it would be better that nothing valuable will be seen inside the vehicle.)

Devaras also said that they believed that Perales was not working alone in his illegal activities and that he had possibly cohorts.

He, however, said that they would determine this in their investigation on Perales.

Perales was detained at the Mambaling Police Station detention cell pending the filing of charges.