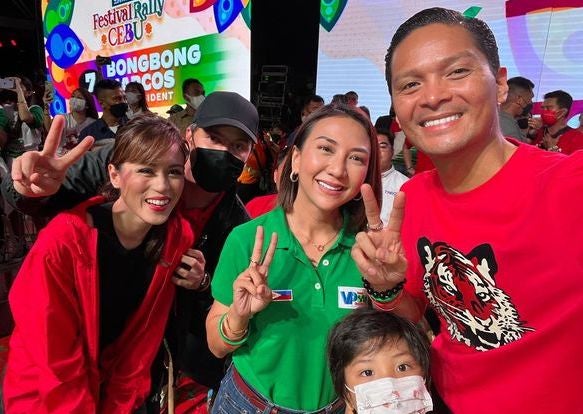 Rep. Duke Frasco and Liloan Mayor Christina Garcia-Frasco with actress-host Toni Gonzaga and her husband director Paul Soriano during the UniTeam rally at the South Road Properties in Cebu City. | Photo from the FB page of Duke Frasco

In a statement, Frasco said, it was already the sixth time that he got the endorsement of the influencial group led by Ka Eduardo Manalo.

Frasco was Liloan Mayor before he won his bid for the 5th district of Cebu in 2019.

He first received the groups’ endorsement in 2007 when he first ran for mayor of Liloan town.

“I am truly grateful that Iglesia’s consistent endorsement over the years affirms the efforts we have made towards ensuring progress for our District and a better life for our people,” Rep. Frasco said.

INC also endorsed the reelection his wife, reelectionist Liloan Mayor Christina Garcia-Frasco, her runningmate and incumbent Councilor Aljew Frasco and the eight councilors seeking election with them under the One Cebu Party.

“I am deeply grateful to the leadership and members of Iglesia ni Cristo for their consistent endorsement and support since I first ran for Mayor in 2016,” Mayor Garcia-Frasco said.

As she seeks a third term in office, Garcia-Frasco said she would continue to give her all for her constituents.

“As I run for my third and last term as Mayor of the Municipality of Liloan, I can honestly say that I have given this nothing less than my everything, even and especially in the most difficult times. With your support, I will continue to give this my all for the love of Liloan and all Liloanons!” she said.

Read Next
‘God is watching you,’ pro-Robredo priests tell Comelec