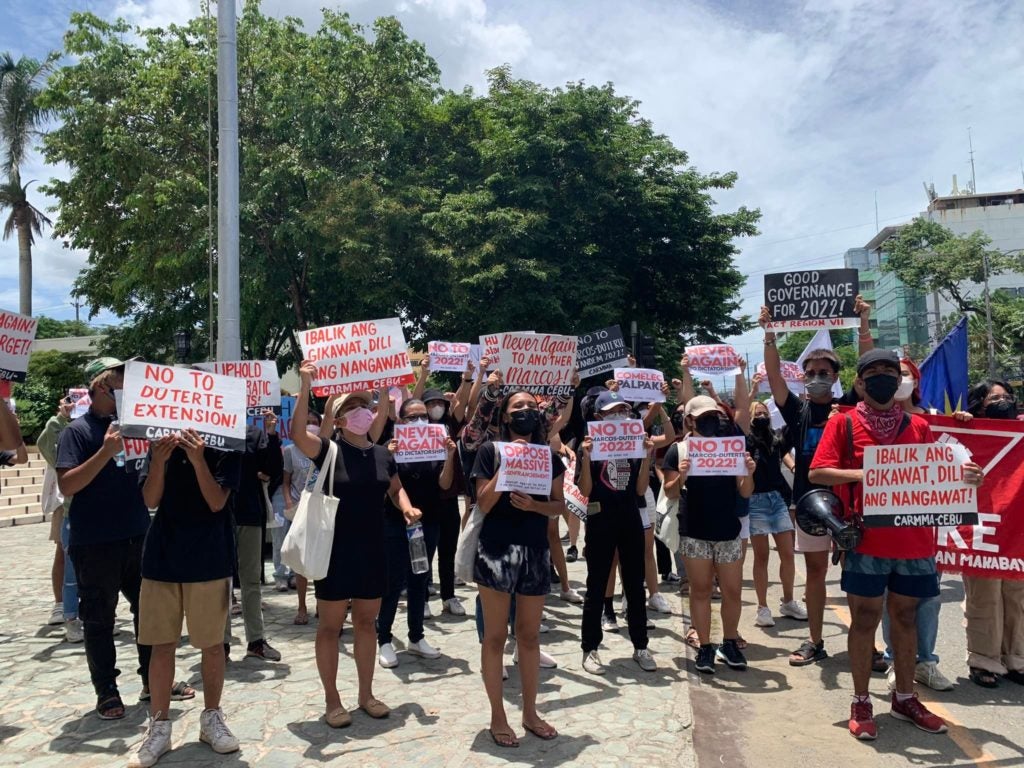 Members of progressive groups in Cebu staged a protest in front of the Provincial Capitol a day after the elections, as they condemn alleged anomalies and irregularities in the conduct of the May 9 polls. | Pegeen Maisie Sararana

CEBU CITY, Philippines — Some members of progressive groups here staged a protest in front of the Cebu Provincial Capitol on Tuesday, May 10, questioning the partial and unofficial results of the national and local elections, particularly that of leading contender Ferdinand “Bongbong” Marcos.

Among the progressive groups were Kabataan Partylist, Gabriela, Campaign Against the Return of the Marcoses and Martial Law (CARMMA)-Cebu, and Kabataan Tayo Ang Pag-asa-Cebu (KTAP-Cebu).

The group protested the alleged anomalies and irregularities of the Commission on Elections (Comelec) in the conduct of the May 9 polls.

(Even during the election day, voters complained about malfunctioning Vote-Counting Machines.)

(Yesterday, cheating was very rampant. With 1,800 VCMs malfunctioning how come they were able to tally millions of votes, especially in the presidential and vice-presidential races.)

The group started their protest at around 11 a.m. and ended it after at least 20 minutes.

Police also went to the area to monitor the peaceful activity.

For his part, Police Lieutenant Colonel Wilbert Parilla, deputy director for operations of the Cebu City Police Office (CCPO), said there were no untoward incidents during the conduct of the protest as protesters also dispersed after being provided time to air out their concerns.

Past midnight on May 10, the CCPO prepared at least 32 personnel of the Civil Disturbance Management (CDM), as they anticipate rallies will be staged following the unofficial results of the election.

Parilla said their CDM personnel will always be on standby and ready to respond when needed.     /rcg