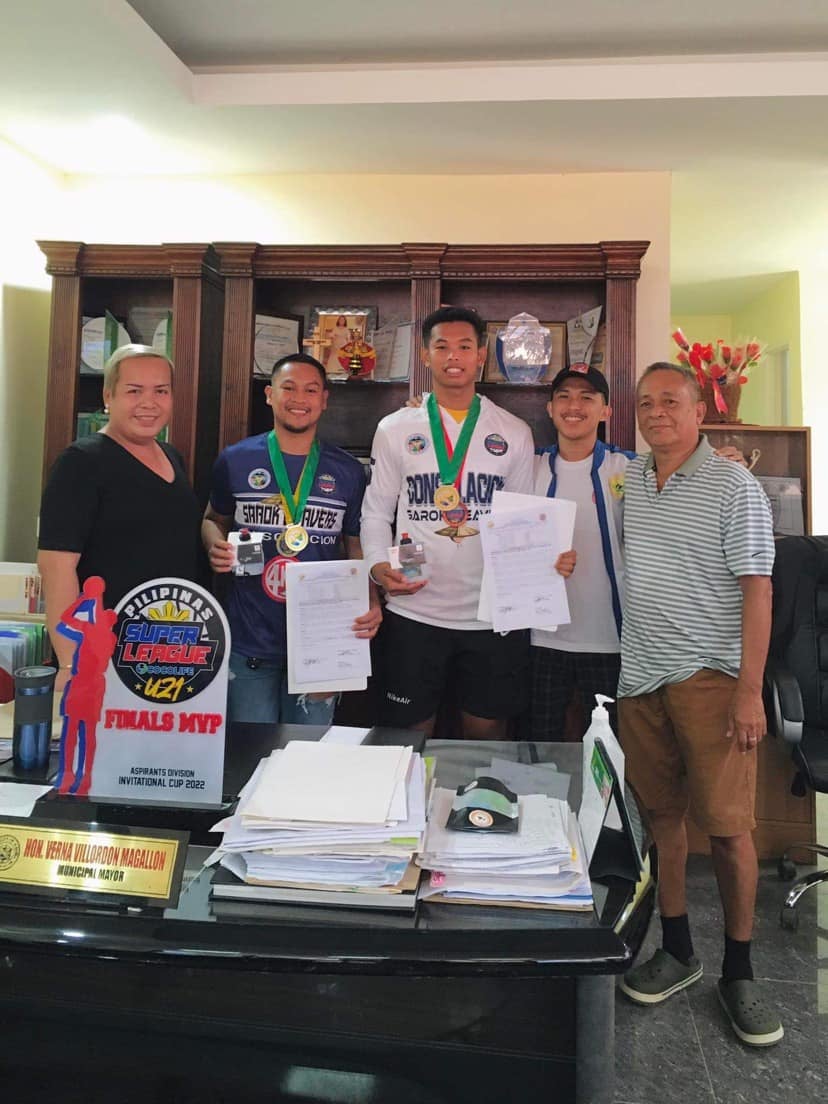 Alocillo and Montemayor returned to their hometown earlier this week. They paid a courtesy call to town officials at the Municipal Hall of Alegria.

The young coach known for his grassroots coaching clinic in Cebu led the Sarok Weavers into its dominating run in the PSL U21 Aspirants Division Cup en route to winning the inaugural title last April in Roxas, Zamboanga del Norte.

The Sarok Weavers finished their campaign with a stellar 9-1 (win-loss) record, including their semifinals and finals appearance. They swept the host team, Roxas Vanguards, in the finals, 2-0, in their Best-of-Three Finals series.

Montemayor, a former University of Santo Tomas (UST) Tiger Cub, was named finals MVP and the league’s Mythical Five for his dominating performance.

The Barangay Poblacion, Alegria native, tallied a monstrous double-double performance in their title-clinching victory in Game Two with 20 points and 21 rebounds.

For Alocillo, being welcomed by his hometown, folks surely warmed his heart, considering one of his goals in the PSL was to represent Alegria.

“Mao jud na akong goal to represent pud Alegria while coaching Consolacion. Although lahi gani nga municipality akong gi represent during the league, I always make sure to bring honor to where I came from,” said Alocillo from Barangay Santa Filomena in Alegria.

(That is my goal to also represent Alegria while coaching Consolacion. Although it was a different municipality that I represented during the league, I always make sure to bring honor to where I came from.)

“Coming from Alegria, our town is not that known in sports, so winning the PSL U21 is very special to Rojan and me. We always take pride in our achievement,” he said.

Alocillo said that before he was tapped as the Sarok Weavers’ head coach, he and his father had already initiated the town’s sports program where they discovered Montemayor.

(We, my father and I, have built a team here and a sports program. When my father left sports, I replaced him in the Governor’s Cup. We also did training of the local coaches that can replace us when we won’t be here in Alegria.)

He also revealed that they were already yearning to get back into action in the PSL with the Sarok Weavers, which he considered his family.