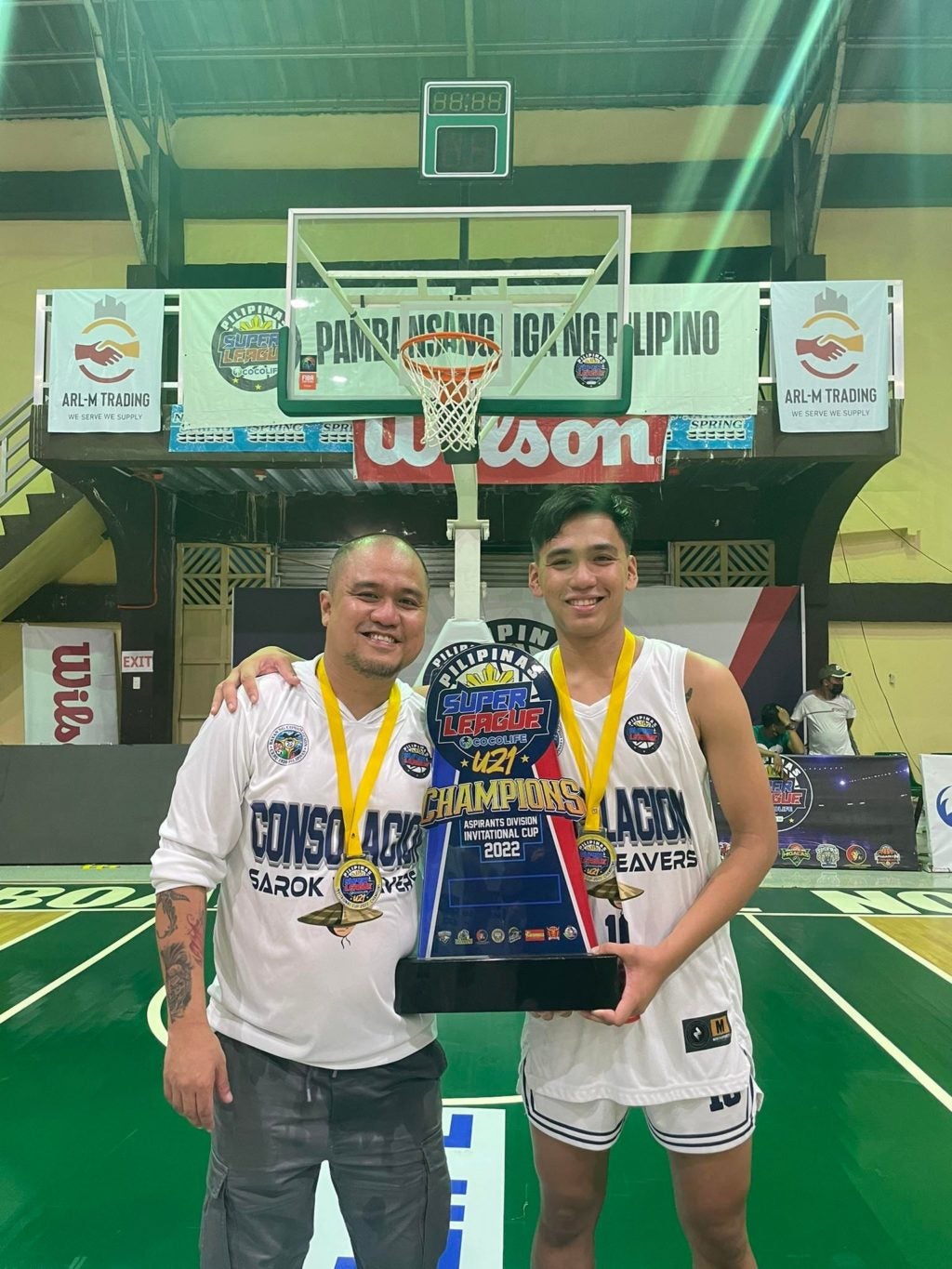 CEBU CITY, Philippines—The massive success of the Consolacion Sarok Weavers in the Pilipinas Super League (PSL) Under-21 Aspirants Division Cup has more to it than meets the eye.

The Sarok Weavers completed near-perfect domination in their campaign by winning the title of the league’s inaugural season in Roxas City, Zamboanga del Norte.

They won eight games, including a 2-0 sweep in the Best-of-Three Finals series against home team Roxas Vanguards.

Behind all the success of the team is a father-and-son tandem that helped make the team extra special.

Team manager Mark Malazarte told CDN Digital that he put up the formidable team last year because of his son, 21-year-old Wesley, who suited up as a guard for the Sarok Weavers.

The Sarok Weavers have an inspiring story of their enduring journey to the PSL. The team had to hurdle challenges such as the Covid-19 pandemic, Typhoon Odette, and the numerous occasions that the league was rescheduled.

“I have been forming teams for local and small leagues since 2014. The idea started when I had a talk with my son over dinner after his experience in Leyte playing basketball last November. I asked him if he enjoyed it and he said yes. I asked him if ever given the chance to play for PSL U21 would he give his commitment and his all to it. When he said yes, without second thoughts, I immediately contacted Coach Kareem and asked him if he would be interested,” said Mark, who was with the team for 25 days in their campaign in the PSL.

“When I got Coach Kareem’s (Alocillo) interest that same night, we immediately set a meeting the next day to talk about the details. And thankfully Coach Paul Flores also was very interested in the idea of forming a team. And that’s where everything for the Consolacion Sarok Weavers started.”

Before he got hooked on basketball, Wesley loved to play football, according to Mark. Watching the Barangay Ginebra San Miguel and the Golden State Warriors, Mark’s two favorite basketball teams, influenced Wesley to play this sport.

Mark and Wesley both agreed that their tandem in basketball has its own pros and cons, but, their mistakes strengthened their bond as father and son.

For Mark, he was initially hesitant to let Wesley play in the PSL, considering the latter doesn’t have experience playing in a varsity team. However, all his doubts were erased when his son sank his first three-point shot in the game.

Although Wesley is not the Sarok Weavers’ ace scorer, his presence on the team was highly valued because of his camaraderie with  his teammates and his hustle every time he gets called to play.

“At first I was kind of nervous considering he doesn’t have any varsity experience. But during the first game, when he made his first three-pointer, I couldn’t be any prouder and felt confident that he could play with the other boy,” said Mark.

For Wesley, it’s a huge honor for him to play for the Sarok Weavers and felt very lucky to have a father like Mark who supports him in his favorite sport.

“I feel lucky that both of my parents support me all the way in whatever I do especially in playing basketball. They push me to do better and inspire me to work hard both in practices and actual games,” said Wesley, who dreamed of playing one day for a collegiate basketball team.

Wesley decided not to pursue playing in a varsity team because of his age and his lack of experience. But with their success, he hopes that his hard work on the floor gets noticed by scouts from universities or commercial teams.

“I feel honored to be a part of such a talented team along with its success despite having a lack of experience and skills. I’m very lucky to have coaches and teammates who extended their patience in teaching and guiding me throughout my PSL journey,” added Wesley.

Wesley added that the biggest challenge playing for his father is that he feels pressured all the time. But he said he’s gotten used to it already.

With the massive success in the PSL, Mark is very optimistic that his team will continue campaigning in the next season of the PSL.

However, Wesley is uncertain if he can suit up anew with the Sarok Weavers considering that he is also prioritizing his studies. Still, Mark is hopeful that they can continue their father-and-son tandem in basketball in the next season.

In the meantime, the Sarok Weavers, Mark, and Wesley will continue cherishing their victory after months of sacrifice and hard work.