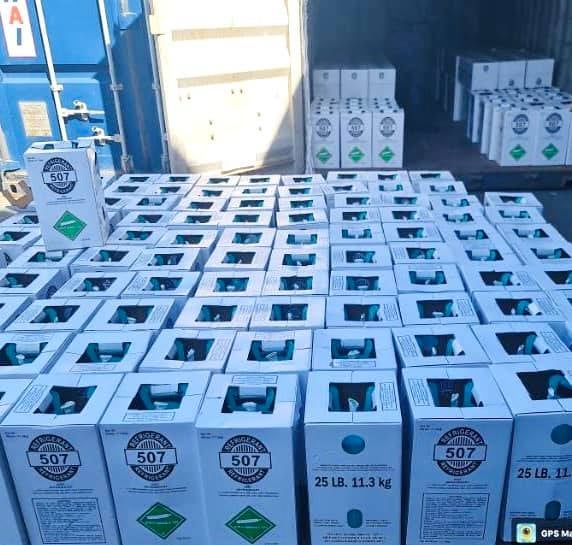 Some 300 smuggled cylinders containing trifluoromethane, a chemical compound often used as refrigerants, were confiscated by the Bureau of Customs – Port of Cebu (BOC-Cebu) | Photo from BOC – Port of Cebu

BOC-Port of Cebu, in a statement, said they confiscated at least 300 cylinders of Refrigerant Gas shipped from China. They contained trifluoromethane, a chemical compound classified as a greenhouse gas.

Trifluoromethane is often used as a refrigerant, and also identified as an ‘ozone-depleting alternative’. When not handled properly, it may cause harm to anyone in contact and damage to properties, according to the National Center for Biotechnology Information of the United States government.

The customs added that they received information that the imported chemicals arrived in Cebu without the required documents and permits.

This prompted them to conduct a physical examination on the shipment, with the Enforcement and Security Service, Customs Intelligence and Investigation Service, X-Ray Inspection Project Team, Philippine Coast Guard, Philippine Drug Enforcement Agency, and the Environmental Management Bureau.

“Under DENR-EMB Memorandum Circular No. 2005-03, importation of alternatives to ozone-depleting substances such as trifluoromethane must be covered with Pre-Shipment Importation Clearance prior to its entry into the Philippine territory,” they added.

The shipment remains under the custody of Cebu’s customs but is set to be disposed of soon.

“Under the leadership of Commissioner Rey Leonardo B. Guerrero, the Bureau of Customs continues to intensify its border protection measures to prevent the entry of products hazardous to the environment,” the Customs said.      /rcg

Read Next
Immunocomprised individuals urged to get 2nd booster