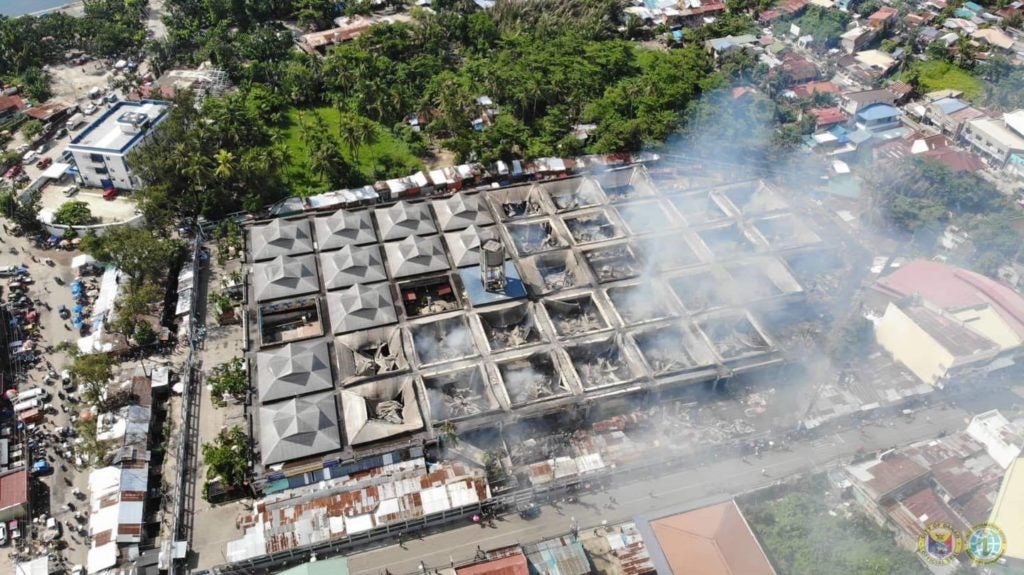 No less than 100 stalls were razed by the fire that hit the Danao City Public Market on Thursday evening, June 2, 2022. Danao City fire officers estimated the damage to property at P52.2 million. | Photo courstesy of Danao City Gov’t

CEBU CITY, Philippines — At least P52.2 million worth of property was lost in the fire that gobbled up half of the Danao City Public Market compound in Barangay Poblacion at around 8 p.m. on Thursday, June 2, 2022.

Senior Fire Officer (SFO1) Ronald Telledua, the fire investigator of Danao City Police Station, said that at least a hundred stalls were totally burned comprising 80 percent of the total number of stalls in the market.

According to Telledua, the fire was reported around 8 p.m. on Thursday evening, when a man went to their office to report the blaze.

It was raised to the third alarm at 8:30 p.m. and to a general alarm at 9:14 p.m. prompting fire stations from neighboring towns and cities to lend assistance including those from Cebu City, Consolacion, Compostela, Carmen, Liloan, Mandaue, Lapu-Lapu, and Talisay City.

The fire was only declared as fire out at 6 a.m. on Friday, June 3, as firefighters made sure that it will no longer reignite.

According to Telledua, the fire started from a stall owned by a certain Janice Capul but failed to cite what caused the blaze.

Telledua said that the products being sold is a huge factor on why the fire was not controlled immediately.

Telledua said that they have already met with the city officials and Danao City Mayor Nito Durano relaying to them their plan to have the public market temporarily closed to give way to a thorough investigation.

In the meantime, displaced vendors were directed to display their products at a nearby vacant lot.