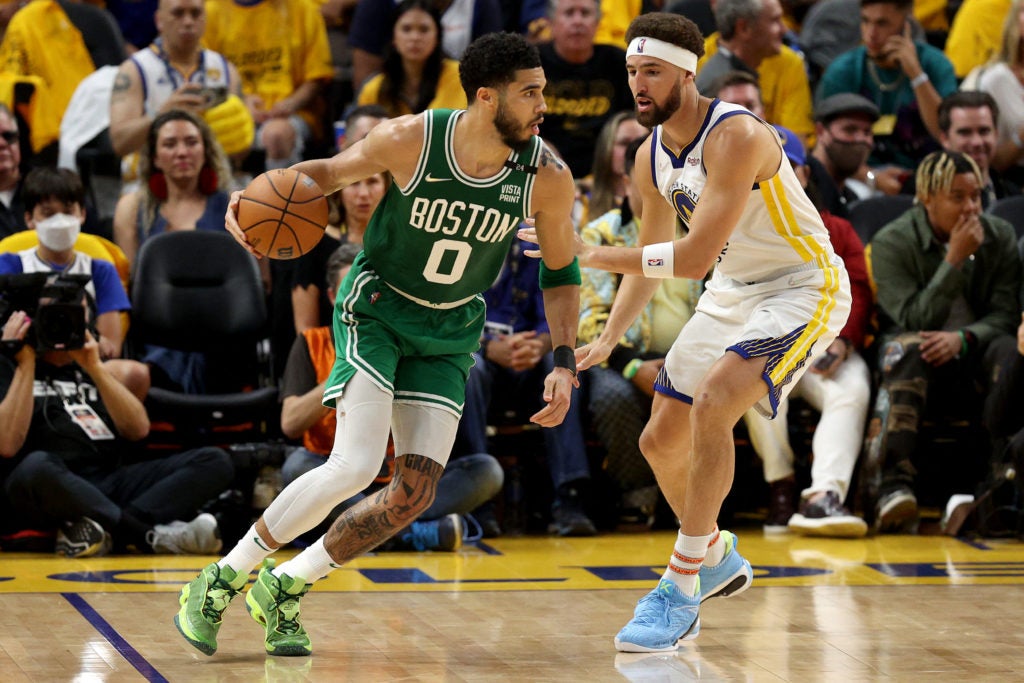 Jayson Tatum of the Boston Celtics dribbles against Klay Thompson of the Golden State Warriors during the second quarter in Game Two of the 2022 NBA Finals at Chase Center on June 05, 2022 in San Francisco, California. | AFP

Stephen Curry scored 29 points as the Golden State Warriors roared back into NBA Finals contention on Sunday with a series-levelling 107-88 game two victory over the Boston Celtics.

The Warriors, who squandered a 12-point fourth quarter lead in game one, were in no mood to allow lightning to strike twice on Sunday as they cut loose to build a double-digit advantage in the third quarter to tie the best-of-seven series at 1-1.

Jayson Tatum topped the Boston scorers with 28 points, but crucially 21 of those came in a hardfought first half.

Only two other Boston players — Jaylen Brown with 17 points and Derrick White with 12 — cracked double digits.

The Warriors defense — marshalled brilliantly by Draymond Green — suffocated Boston in the second half, with two high-scoring Celtics heroes from game one  — Al Horford and Marcus Smart – held to just four points combined.

The series now moves to Boston with game three scheduled for Wednesday and game four on Friday.

“We said we needed to play with desperation and that’s what we did,” said Curry. “It’s a good feeling to get back on track and now we’ve got to take it on the road.

“We got off to a better start defensively where we made an imprint on the game and they felt us more than they did in game one. Our third quarter was great and we got a bit more separation that made the fourth quarter easier tonight.”

The Warriors put themselves in a winning position after outscoring Boston 35-14 in the third quarter to take an 87-64 lead into the fourth quarter.

Poole electrified San Francisco’s packed Chase Center after launching a buzzer-beating three-pointer from near halfway at the end of the third to cap a devastating passage of play from the home team.

The Warriors kept up the pressure in the early part of the fourth quarter, extending their lead to 29 points as the Celtics scrambled to regroup before closing out a blowout win.

Boston — who erupted for 40 points in the final quarter to win game one — picked up where they left off on Sunday, jumping out to an early 13-5 lead with Brown leading the way.

A Brown three-pointer took Boston into a 22-13 lead early in the first quarter before a sustained Warriors rally led by Curry saw the hosts get back to within one point.

A Curry layup on the buzzer gave Golden State a 31-30 lead heading into the second quarter.

Again though Boston found another gear, with Tatum nailing a three-pointer to put the Celtics 33-31 ahead. The Celtics took a five-point lead at 40-35 with a White three-pointer.

The Warriors responded with a 10-0 lead to go up 45-40 and there was little to separate the two teams in the closing stages of the half. Wiggins scored from an offensive rebound to give the Warriors a slender 52-50 half-time lead.

Boston looked the more dangerous team for long periods of the first half, and made 10-of-19 from three-point range, including five from Tatum while Brown finished the half with 15 points.

But the Warriors — who made only six from beyond the arc in the first half — erupted after the break to seal the game.

The Celtics meanwhile coughed up 18 turnovers as the Warriors defense took charge.