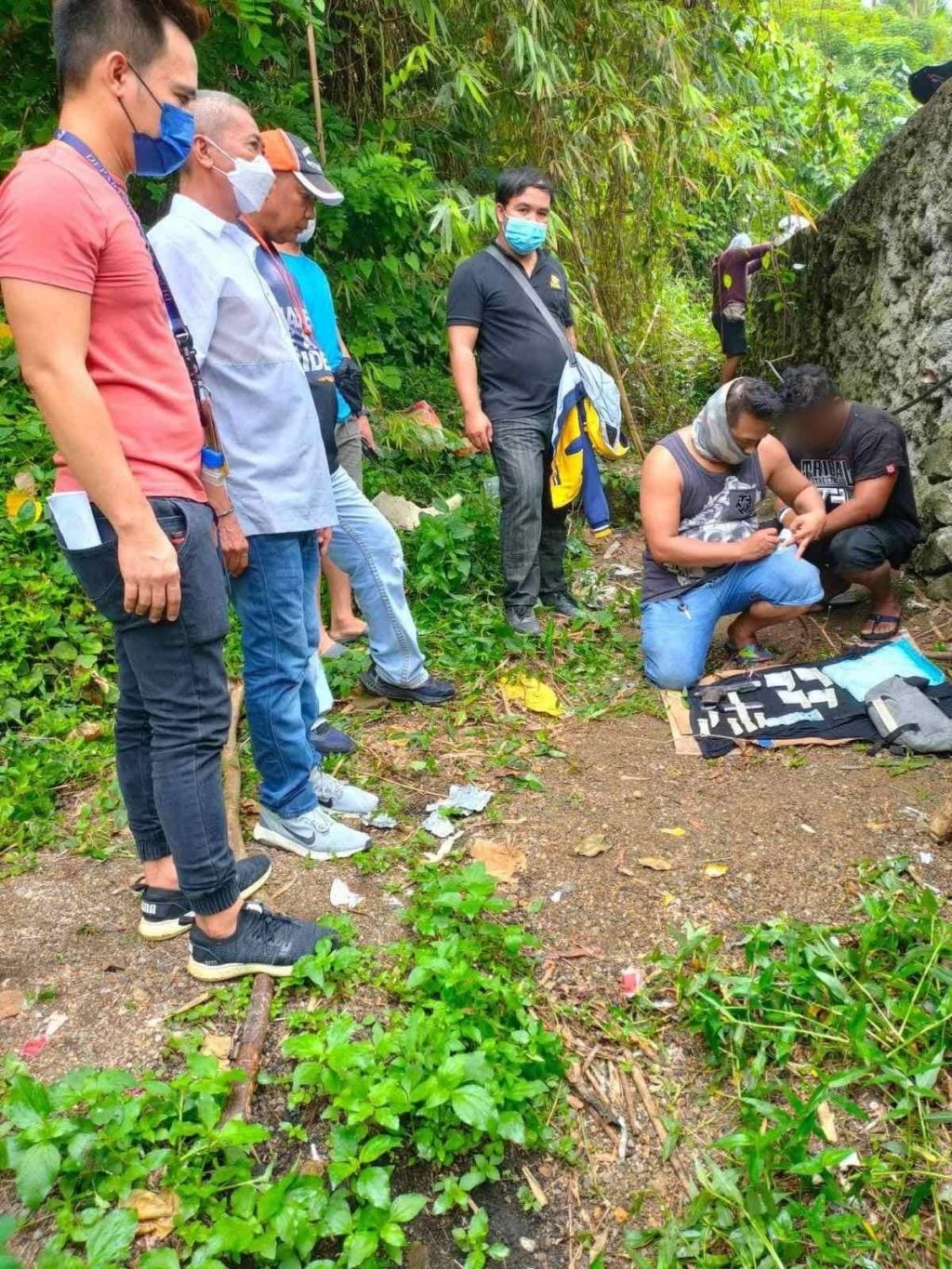 At least 1.1 kilo of suspected shabu worth P7.4 million was confiscated from a 29-year-old man during a buy-bust operation conducted in Sitio Tarcom, Barangay Busay, Cebu City, past 2 p.m. on Saturday, June 11, 2022. | Mabolo Police Station

CEBU CITY, Philippines — A buy-bust operation in Barangay Busay, Cebu City today, June 11, resulted to a shootout, the wounding and arrest of a suspect, and the confiscation of P7.4 million worth of suspected shabu.

This was, however, just one of four separate buy-bust operations conducted this day by Cebu City and Carcar City policemen which yielded a total drug haul of P8.3 million worth of suspected shabu and led to the arrest of four drug suspects.

The Barangay Busay, Cebu City buy-bust operation was conducted at past 2 p.m. today where 1.1 kilos of suspected shabu were confiscated from a 29-year-old man, who got wounded in the arm when he tried to shoot an undercover policeman using a .45 caliber pistol as he tried to flee from the policeman and his colleagues.

Police Major Renz Talosig, chief of Mabolo Police Station, identified the wounded suspect as Paul Kevin Abella, a former construction worker and a resident of Sitio Tarcom of the barangay.

Initial investigation showed that the shootout happened when Abella allegedly realized that he was dealing with an undercover policeman and so he pulled out his .45 caliber pistol fired once at the policeman, and then tried to escape.

Abella missed, and the policeman and his colleagues fired back, hitting Abella in the arm, and they succeeded in arresting him.

(He was shot in the arm because when he realized that he was dealing with a policeman, he suddenly pulled out his gun. Actually, he managed to fire one shot, missed, and then started to run to escape. When he turned to run, the policemen then neutralized him, hitting him in the arm. It was an armed confrontation.)

Talosig said they also confiscated the more than a kilo of shabu with an estimated market value of P7.4 million from Abella and also the .45 caliber pistol.

He said that they had been monitoring the suspect for quite a while now after his name surfaced from previous illegal drug operations that they had conducted.

He also said that the Busay buy-bust operation against Abella was conducted after they also received reports from residents in the area, who informed them about Abella’s illegal activities there.

The Mabolo Police Station chief also said that Abella was arrested last June 2021 for the same offense, but he was released from jail through a plea bargaining agreement.

Talosig described Abella as a high value individual, who would allegedly sell illegal drugs in the Lahug and Busay areas of Cebu City.

The suspect was detained at the Mabolo Police Station detention cell pending the filing of charges.

Earlier at past midnight or early morning of June 11, Cebu City police also arrested a 32-year-old woman in a buy-bust operation along B. Rodriguez St., Barangay Sambag II in Cebu City.

Police Lieutenant Colonel Allan Rosario, chief of City Intelligence Unit of the CCPO, in his report, identified the suspect as Jenelyn Alcuizar, who was also a high-value individual in terms of her illegal drug activities.

Rosario said that the CIU confiscated 125 grams of suspected shabu from Alcuizar, who is from Barangay Duljo Fatima in Cebu City.

The CIU chief said that the illegal drugs confiscated from Alcuizar had a market value of P850,000.

Alcuizar was detained at the CCPO detention cell pending the filing of charges.

First to fall was Alegado, who was arrested during the buy-bust operation in Barangay Bolinawan, Carcar City at 1:30 a.m. today.

He was caught with 15 sachets of suspected shabu which had a market value of P4,080.

Next to fall was Quilario, who was caught with 6 sachets of suspected shabu which had a market value of P1,632.

Quilario was arrested during another buy-bust operation at 3:40 a.m. today also in Barangay Bolinawan, Carcar City.

Both suspects were detained at the Carcar City Police Station detention cell pending the filing of charges.

Carcar City is a fifth class component city of the province of Cebu which is located 39 kilometers south of Cebu City.