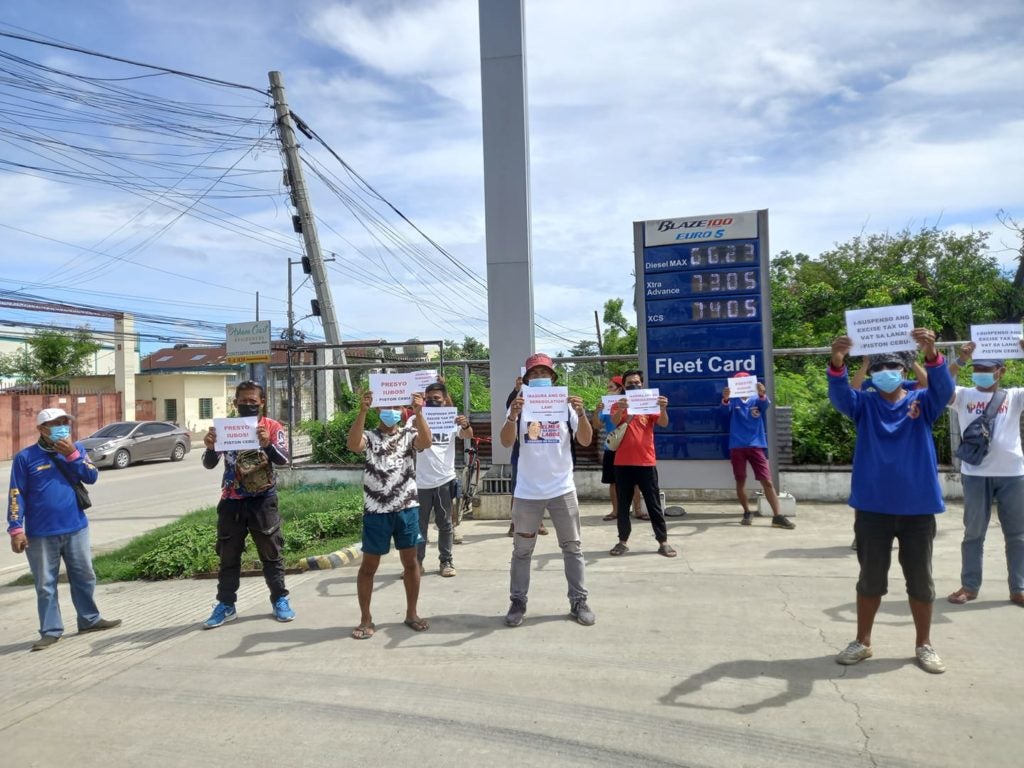 This March 2022 photo shows members of PISTON-Cebu Chapter staging a rally due to the increase in fuel prices.

CEBU CITY, Philippines — At least 2 percent of public utility vehicle (PUV) drivers in Cebu are no longer plying the streets due to the rising prices of fuel and economic struggles.

This was revealed by Pinagkaisang Samahan ng mga Tsuper at Opereytor Nationwide (PISTON)-Cebu chapter in a media forum held on June 21, 2022.

PISTON-Cebu Chapter coordinator Gregory Perez said that the rising price of fuel has gravely affected the jeepney operators in Cebu, with many of them choosing to find work elsewhere.

Based on PISTON-Cebu’s data of the 11,000 jeepney units in the island pre-pandemic, there were 30,000 drivers operating these units. Barely half of these drivers were able to return after the pandemic, or less than 15,000 drivers.

Out of the 15,000 who returned, two percent of the drivers shifted to other industries or have opted to go home to the farmlands in their provinces.

(This has a huge effect on commuters who seek affordable means of transportation. We see how difficult the situation is on our roads, even if it’s not rush hour.)

PISTON-Cebu said that with the lack of drivers and units plying the streets, the ordinary commuters are being affected the most because they find it difficult to find PUVs on the streets.

For this reason, PISTON-Cebu will not be asking an increase in fare from the Land Transportation Franchising Regulatory Board (LTFRB) since the drivers understand that even commuters are having a hard time.

PISTON Cebu did not file the increase, saying that an increase will only make the consumers suffer more.

For now, Perez said they are thankful that the Cebu City government is distributing gasoline discount cards and that Cebu City drivers receive yearly aid of rice and goods from the city government.

Still, this is not enough and PISTON-Cebu is asking the LTFRB to reduce the requirements for traditional jeepneys to return to the streets.

(The modern jeeps can’t keep up, they’re too small in number and their time to ply the streets is limited. We need the traditional jeepney but the problem is we need to go through the eye of the needle to get them back.)

The group is asking the local government unit (LGU) to do something or urge the national government to act amid the rising price of fuel in the country.

Perez said that the transport sector needs all the help it can get to survive this economic struggle brought by an uncontrollable world market.