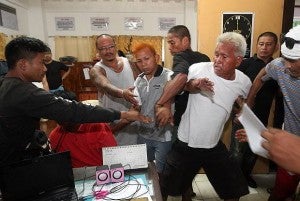 Cooler heads (top) try to restrain a relative of the Villamor couple who flared up on seeing the suspect Jimson Roado at the Liloan police station. (CDN PHOTO/TONEE DESPOJO)

Police in Liloan town in southern Cebu has placed a 28-year-old man who visited their precinct under arrest after he was identified by witnesses as the one who allegedly clubbed an elderly woman in the head in a botched burglary attempt at dawn yesterday.

Jimson Roado was cuffed by police after he allegedly tried to flee on learning that the husband of the victim, Maria Nelia Villamor, was on his way to the police station to confront him about the incident that happened at around 4:20 a.m. Sunday.

Police said they will file a case of serious physical injuries against the suspect before the fiscal’s office today.

Ireneo Villamor, 78 positively identified the suspect as they faced each other at the police station. He said he recognized the profile of the suspect whom he claimed he saw before he fled the crime scene.
Critical

The 70-year-old Nelia was rushed to the Mendero Medical Center in Consolacion town. She sustained multiple fractures on the left side of her face and a 6-cm gash on the head after she was repeatedly clubbed with a piece of wood, which police later found in the suspect’s house. She is conscious but remains in critical condition, her daughter Maritess, a journalist, said.

“I’m glad that based on the CT scan, there was no blood clot,” she said.

Ireneo said it was his wife’s routine to wake up at dawn and switch off the lights at the veranda.

He said he heard his wife scream and tried to come to her aid as fast as he can. He told the police that he had difficulty walking as he was paralyzed and had surgery.

As he neared the front door, Ireneo said he saw a man wearing a black jacket while his wife lay on the floor with blood oozing from her head.

Ireneo and his wife were the only ones living in their two-storey house which was fenced off by a concrete wall.

Maritess said the suspect may have gained entry by scaling an elevated portion of the wall.

According to SP01 Bryan Batiquin, desk officer of the Lilona Municipal Police Office, the suspect called him at around 3 p.m. and  sought his help after learning that he was being linked to the attack.

Text message
Roado told the policeman that he received a text message from his sister informing him that the police  went to their house and were looking for him.

“Ako siyang gi-ingnan nga kung wala man diay kay sala ari na lang diri sa station. Mao mana ang saktong buhaton, (I told him that if he’s really not guilty of the accusation, it’s better for him to come over to the police station. That’s the right thing to do.),” SP01 Batiquin said. 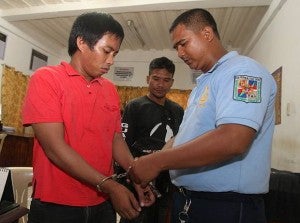 Roado went to the police station to clear his name but witnesses were certain that he was the one who attacked Nelia Villamor.
(CDN PHOTO/TONEE DESPOJO)

At the police station, Roado told his policeman-friend that he was just being made a “fall guy” by his neighbors who allegedly hate him. But when Batiquin told him that the victim’s husband and several witnesses were on their way to the police station, he suddenly made a dash for the exit.

“Nikalit rato siyag dagan. Amo unta siyang gukdon. Maayo gani nga naay police officer nga naa sa gawas ato nagtambay maong nasikop ra ni siya (He suddenly ran away. We were about to give chase but a police officer who was outside the precinct managed to collar him),” the policeman  said.

Agustin Salondaguit, a neighbor of the Villamors, also recognized Roado as the one he saw walking away from the elderly couple’s house.

When I heard the cry for help, I immediately opened the door and saw Roado),” Salondaguit told CDN.

Other witnesses who also went to the police precinct said they did not suspect that a crime had been committed as the suspect calmly walked away from the area where the house was located and went to the “hantakan” – a place where villagers gather to play an illegal coin-toss game.

SP01 Barquin said aside from the piece of wood which was believed to be the one used by the suspect in hitting the victim, they also found a black jacket and a black shirt in Roado’s house.

Read Next
357 back out of gruelling Bar exams, says SC