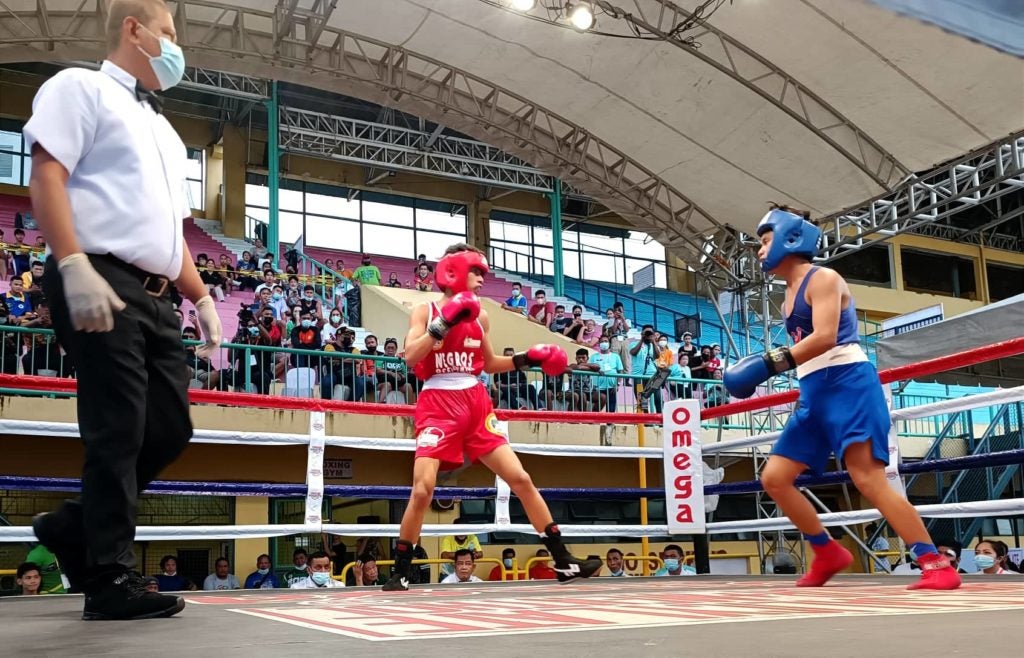 AJ ALA Villamor (blue trunks) and Rudy Jungco Jr (red trunks) size up each other during their bout in the Palarong Pambansa VisMin Boxing Cup at the CCSC. CDN Digital photo / Glendale Rosal

CEBU CITY, Philippines — The Palarong Pambansa VisMin Boxing Cup opened on Tuesday at the Cebu City Sports Center (CCSC) with the hopes of discovering the country’s next boxing superstars.

A total of 80 boxers from eight teams comprised of various LGUs in the Visayas and Mindanao regions will be seen in action in the coming days at the CCSC.

In his speech, Cebu City Vice Mayor Raymond Garcia reminded the boxers to enjoy the experience and uplift sportsmanship.

“In your pursuit for glory, may you all still remember to enjoy yourselves and to enjoy the amazing sport that is boxing. This is but a single chapter of your life’s story. Whether you’re triumphant or you failed, what is important you learned and grow from the experience. Most importantly, you had fun as well, let us not forget that we have the Palarong Pambansa to foster the spirit of discipline, teamwork, excellence, fair play, solidarity, sportsmanship, and values,” said Garcia who attended on behalf of Cebu City Mayor Michael Rama.

Highlighting the 20 featured bouts on opening day was the victory of AJ ALA Villamor, the son of former world title challenger and ALA Boxing Gym trainer Edito Villamor.

The 14-year-old Villamor who represented Cebu Province defeated the taller Rudy Jungco Jr. of Negros Occidental by unanimous decision in their three-rounder bout under the school boys pinweight category.