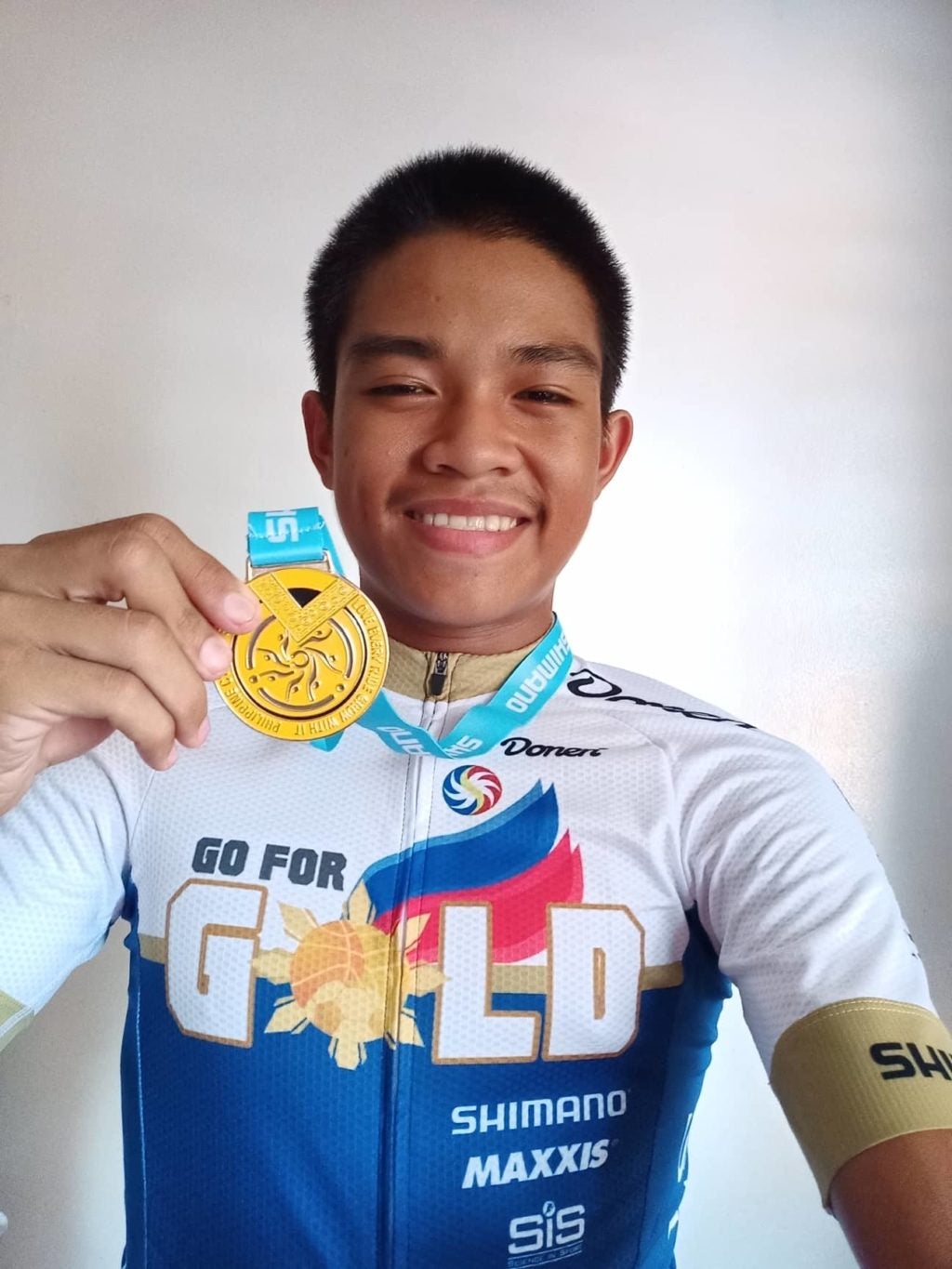 Dwight Santos wearing the coveted Go For Gold jersey with the medal he won last June in Pampanga. | Contributed Photo

Go, who was in Panglao Island, Bohol last weekend to supervise the Go For Gold Sprint, which was one of the twin triathlon events of Sunrise Events Inc., told CDN Digital that they had officially recruited Santos.

The 16-year-old Santos caught the attention of the Go For Gold when he dominated the 14-16 youth category of the Philippine Cycling Festival last June 3, 2022, in Clark, Pampanga.

For Go, they have been watching Santos under the radar before they decided to officially recruit him last month.

“Si Dwight actually, as you know, I always have my eye on cycling and triathlon in Cebu. Matagal na namin siyang nakikita, pero sa Pampanga he won there, and we had the chance to talk. So we decided it’s the best time for him to join the program and take the next step with the hopes of following the footsteps of Jonel Carcueva,” said Go.

(Dwight, actually, as you know, I always have my eye on cycling and triathlon in Cebu. We have long noticed him, but in Pampanga he won there, and we had the chance to talk. So, we decided it’s the best time for him to join the program and take the next step with the hopes of following the footsteps of Jonel Carcueva.)

Go For Gold has a solid triathlon program in Cebu under the tutelage of Roland Remolino, the father of SEA Games triathlon silver medalist Andrew Kim Remolino.

Recruiting Santos to their fold is a continuity of their cycling program with the hopes of developing the young lad as the next Carcueva or even better.

“Jonel Carcueva is the current national champion, after winning the national road race. Meron kaming nakuhang bagong cyclist si Dwight Santos. So we’re hoping na eventually, we invite more athletes from Cebu. Sana we can do a race pareho sa sprint, but in the cycling for Luzon, Visayas and Mindanao,” added Go.

(Jonel Carcueva is the current national champion, after winning the national road race. Now, we have recruited a new cyclist, Dwight Santos. So we’re hoping that eventually, we invite more athletes from Cebu. Perhaps, we can do a race like in sprint, but in cycling for Luzon, Visayas and Mindanao.)

For Santos, he is thankful and still in cloud nine when he was recruited by the vaunted sports team and joined the likes of fellow Cebuanos Jonel Carcueva, Andrew Kim Remolino, Moira Erediano, and Raven Faith Alcoseba.

“At first I really couldn’t believe it because to be part of this team was just a dream of mine. I was shocked at that time when sir Jeremy Go approached me and asked me after I won the race if I would accept a contract from Go For Gold Philippines. I was actually waiting for that moment, so I didn’t think twice and didn’t let that opportunity pass. So I gratefully accepted the offer,” said Santos.

Being recruited by Go For Gold is one step closer for Santos’s dream of competing in bigger races, ultimately international races in the future.

“I am taking steps to achieve that goal by training consistently in order to be a stronger, better and smarter cyclist. I aim to make the people who believe in me proud — especially Sir Jeremy Go,” said Santos who has come a very long way who started as a leisure cyclist late in 2019.

“I know what I’m capable of and what I can bring to the table. I’m always up for the challenges. I can climb mountains and I can race in flat roads. I’ll do whatever I can to help this team,” Santos said.

He also said that he wouldn’t be where he was right now without the help of several people, and he thanked his family, the Uban Ta Bai’ke family, his JM Cycle Team and his mentor John Mier.

He has an upcoming criterium race this weekend with the Uban Ta Bai’ke.