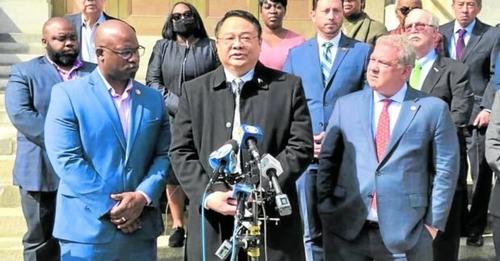 A 51-year-old Filipino woman has become the latest victim of hate crime targeting Asians in the United States, according to the Philippine Consulate in New York.

“[The victim] was verbally assaulted and harassed by a homeless woman,” Philippine Consul General Elmer Cato said on Twitter.

Cato said the assailant also tried to block the victim from boarding the train at the 63rd Drive Subway Station in Rego Park in Queens district.

The assault, which happened in the afternoon of July 16, was the 42nd incident of hate-related attacks or criminal violence that victimized Filipinos in the United States since the consulate started collating and monitoring such incidents last year.

It also occurred after the New York City Police Department disclosed that there had been a 37-percent increase in major crimes, such as hate crimes, in the city.

In a separate advisory, the consulate again advised Filipinos who had experienced hate crimes to report the incidents to its office in Manhattan or call 911 for immediate assistance.

“The consulate is requesting [our countrymen] to report such incidents so that it can more accurately assess the situation and issue timely advisories to help ensure the safety and security of members of the Filipino community,” it said.

“[Filipinos] residing in New York and those on temporary visits are reminded to always remain vigilant and to take the necessary precautions, especially when walking in the streets or taking mass transport,” the consulate added.

PH diplomat faces up to anti-Asian violence in US