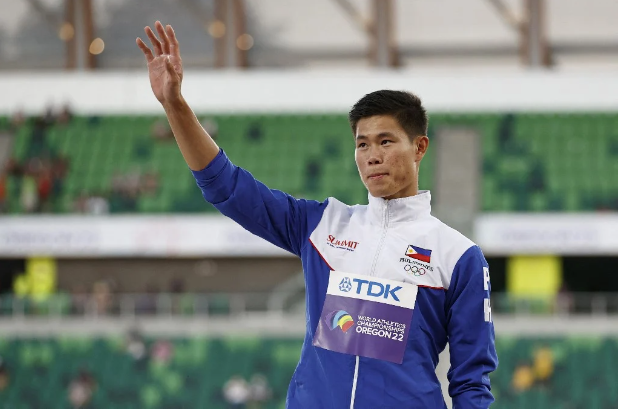 MANILA, Philippines — EJ Obiena has pledged to donate his incentives from the Philippine Sports Commission to the ailing Lydia De Vega.

Obiena, who will receive Php 250,000 from the PSC after setting a new Asian record in the World Athletics Championships in Oregon, announced that he will donate his incentive to support the medical expenses of the legendary track star, who is battling breast cancer and is in “very critical condition.”

The Filipino pole vaulter, who rose to his new career-best world No.3 in the world rankings, said that his advisor James and nutritionist Carol Lafferty also pledged to match his donation for a total of Php 500,000.

“I have just learned of the plans of PSC to reward me with 250,000 pesos incentive for breaking the Asian Record. This is deeply appreciated, and certainly needed since my funding is still yet to be sorted, despite the mediation agreement,” Obiena said. “However, on the flight back to Italy, it occurred to me that despite my own training needs, Mam Lydia needs this money more than I do.”

“They (James and Carol) too have met Mam Lydia on many occasions, and have a deep desire to help. We hope this makes a difference and gives Mam Lydia added strength to battle this horrible disease. God bless you and give you strength Mam Lydia,” he added.

Obiena, who set a new national and Asian record in the worlds last weekend with 5.94 meters, said he owed his success on the world stage to the legends of Philippine athletics like de Vega, who also competed in the 1983 World championship.

“The legends of Philippines Athletics who paved a way for me. Who brought attention and success to athletics. I owe them a debt of gratitude. I thank them for the route they have forged for us competing today,” he said. “I have met Mam Lydia in Singapore on many occasions, and she has always been kind, supportive, and loving individual.“