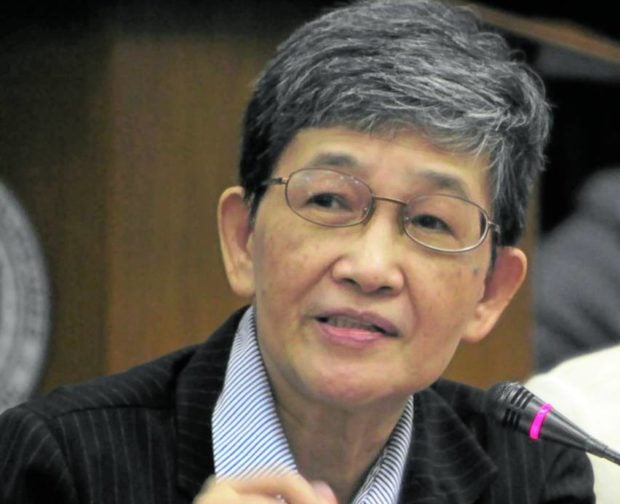 MANILA, Philippines — The film “Maid in Malacañang,” which supposedly depicts the last 72 hours of Ferdinand Marcos and his family in the presidential palace before they fled the country in disgrace in 1986 could be a top grosser, albeit through arm-twisting, if word about alleged forced ticket sales were true.

Chinese-Filipino civic leader Teresita Ang-See disclosed on Saturday that some business groups were called upon by Sen. Imee Marcos, the late ousted dictator’s daughter, to purchase millions of pesos worth of tickets for the movie for distribution to various schools.

Ang-See, an academician and social activist, said there were “many schools” that had been given the tickets. She said she knew of one business group that was allegedly tapped by the senator to buy 5,000 tickets worth P1.5 million.

Ang-See refused to identify the business group so as not to “single them out,” considering that many others had been approached to promote the movie.

In a statement that has been circulating on Facebook and other social media platforms since Friday, she said that the distribution of the tickets was “tantamount to asking these educational institutions to promote outright lies, falsehoods and historical distortion.”

“Creating more polarization by forcing untruths on the public just makes us citizens lose any remnant of respect that we have had for the current leadership of the country,” Ang-See said.

Senator Marcos refused to comment on the social media posts about the free tickets being given away. Her office referred the Inquirer to a statement by VinCentiments, a film outfit involved in the production of the movie, which denied the allegations.

The company statement said the distribution of free tickets was the handiwork of the “kakampinks,” referring to supporters of former Vice President Leni Robredo who lost the May 9 presidential election.

“The office of Senator Imee, Viva Films, and VinCentiments do not give out free tickets — that is the work of the kakampinks — and they are merely passing it on to us,” VinCentiments said.

It said business groups, local leaders, and Marcos loyalists booked the screening of the movie on their own.

“We never ordered this, but we will not stop them, and we are thankful for their initiative,” the statement said.

The group, however, appealed to ticket sellers especially those overseas not to resort to scalping.

“In Dubai, tickets there have been sold out for the past four days. We ask that they don’t increase ticket prices so that everyone gets to watch the movie,” it said.

The movie will be shown on Aug. 3 and another film to counter it, “Katips,” will also open on the same day.

“Katips” by multi-awarded director Vince Tañada tells the story of students and activists during the Marcos martial law regime.

It is based on the 2016 stage musical of the same title and has earned 17 nominations from the Filipino Academy of Movie Arts and Sciences (Famas).

In a phone interview with the Inquirer, Ang-See said her social media message was directed at school principals “so that they don’t distribute the tickets.”

“Some of them have returned the tickets, but I told them that before returning, they should cut them in half so they will not be used,” she said.

Ang-See said knew that one “Jesuit school,” which she refused to identify, had received tickets for the movie.

Various posts on Facebook and Reddit showed tickets packed in a brown envelope addressed to Xavier School in San Juan City that allegedly came from the Federation of Filipino-Chinese Chambers of Commerce and Industry Inc. The tickets were to be exchanged for “actual movie tickets” at cinemas at no cost.

The Inquirer could not immediately confirm this.

Ang-See explained that the school she was referring to had already returned the tickets and that the school head, who informed her about the distribution, planned to “tell the others” to also return them all.

“I think some of the schools outrightly destroyed them and that they did not return them at all, based on what I was told,” she said.

They translated into Chinese the articles written by the “mosquito press” to tell the ethnic Chinese community in the country about the impact of the Marcos dictatorship on Filipinos and Chinese Filipinos.

The organization Pagkakaisa sa Pag-unlad was cofounded by her husband and lobbied for the jus soli citizenship and integration of local Chinese into mainstream Filipino society. The group shut down in 1976, or four years after martial law was declared, after the Marcos government tagged it as a “communist front.”

Ang-See told the Inquirer that she could not just simply watch efforts to distort history that she was a part of.

“They want to promote that [movie] not just to make it popular, but clearly as a campaign, as a first step in their campaign for historical distortion,” she said.

“It’s a concerted effort and a concerted campaign. It’s like, you already won [the election], we already conceded. We support the President because of his position, but we cannot support that you are distorting historical facts,” she said. —WITH A REPORT FROM MELVIN GASCON