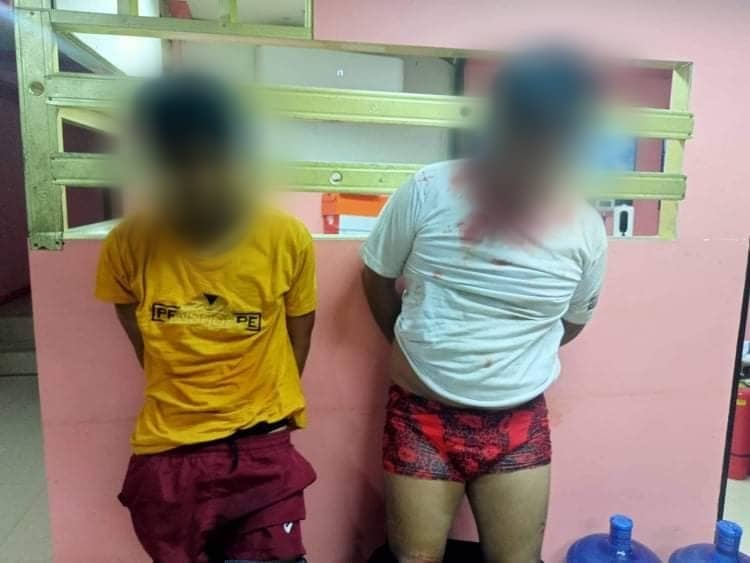 Abellana police appeal to victims to visit their police station and file complaints against two suspected snatchers, who were arrested by police on July 23, during an alleged snatching incident in Barangay Cogon Ramos, Cebu City. | Photo courtesy of Abellana PS

CEBU CITY, Philippines — Police here have appealed to snatching victims in the city to file additional complaints against the suspected snatchers that they have arrested in the past week while police investigate if the two suspects operate with a group in Cebu City.

Police Major Nolan Tagsip, chief of the Abellana Police Station, begged off to disclose the names of the two arrested suspects of snatching as they continued to investigate who would be their possible cohorts in committing the crime, especially within the police’s areas of jurisdiction, which would include barangays Capitol Site, Cogon Ramos, Camputhaw, Sambag 1, Sambag 2, and Santa Cruz in Cebu City.

Tagsip was referring to the snatching incident that happened in Barangay Cogon Ramos in Cebu City on midnight of July 23, 2022.

(So far, this is just them doing it. A two-man team or tandem, but what is part of our investigation is to find out if they have other cohorts. But mostly from our monitoring of these persons who do the crime in our areas are not from here.)

Last July 23, a certain Bencio and Jongjong, residents of Liloan and Consolacion town were arrested after these two allegedly snatched the shoulder bag of a victim, who was walking along Ramos Street in Cebu City, together with her sister and a friend past 2 a.m. Investigation showed that one of these two suspects disembarked from the motorcycle that they were on board and allegedly grabbed the shoulder bag of the victim.

Fortunately, there were mobile patrolers and duty Barangay Peace Security Officers, who were on patrol in the area when the incident happened, which led to their arrest and the return of the victim’s bag with a cellphone worth P10,000 and some personal stuff.

Tagsip said since they anticipated more snatching and robbery incidents would be happening with the easement of restrictions here, police had intensified their police visibility, in coordination with the barangay’s village watchers.

He said their patrolling their areas of jurisdiction would continue.

Tagsip further warned the public about the modus operandi of the arrested suspects, who would be riding a motorcycle, where they would target someone walking down the street alone or with other companions and would grab their cellphones, their bags or their valuables, and after taking these, they would flee immediately on their motorcycle.

Tagsip assured that they were on top of this situation, adding that they only recorded at least one to two snatching incidents in the past weeks.

Following these incidents, police will continue their intelligence monitoring.

Tagsip also said that there was a possibility that these two were involved in illegal drug use and that these could be a resort for them to sustain their vices.

(When you into drugs, everything or anything follows. If you snort drugs, if you have no more money to sustain it (drug use), then you will get involved in robbery, theft.)