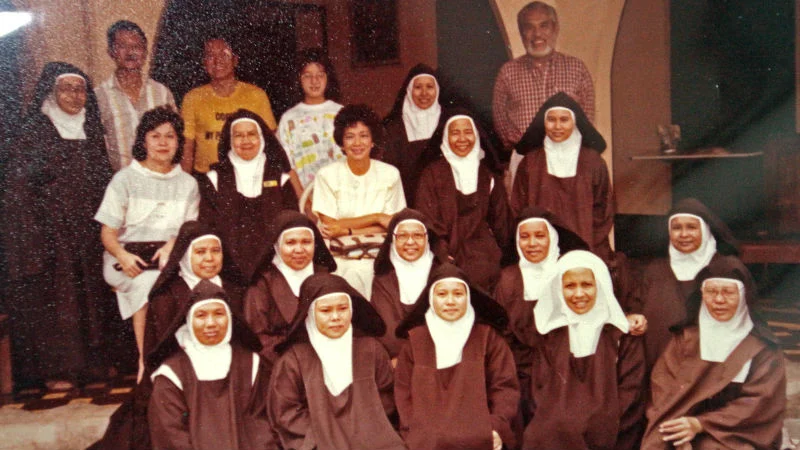 SISTERS’ ACT. Corazon Aquino, who challenged dictator Ferdinand Marcos in a “snap” presidential election in 1986, joined the Carmelite nuns for a group photo at their monastery in Barangay Mabolo in Cebu City where she sought refuge overnight when she was reportedly the prime target of an assassination plot by the military. PHOTO FROM THE CARMELITE MONASTERY ALBUM

Garcia took to social media to publicly defend the Carmelite Sisters who were reportedly portrayed playing mahjong with what seemed to be the late President Cory Aquino in the controversial upcoming film Maid in Malacañang.

“I stand with the Carmelite nuns of Cebu. And I condemn any malicious attempt to malign them,” Garcia wrote on her official Facebook account.

The governor’s statement came hours after the Carmelite Nuns issued an official statement, calling out the production team behind Maid in Malacañang for allegedly putting them in a negative light.

Garcia, however, did not mention the name of the film in her post.

Sister Mary Melanie Costillas, Prioress of the Carmelite Monastery in Brgy. Mabolo, Cebu City, described the scenes in question in Maid in Malacañang as reprehensible, and ‘an attempt to distort history’.

The Carmelites’ statement also came after social media went on fire when netizens published stills from the trailer of the upcoming film and alluded that these portrayed former President Cory’s stay in their monastery in 1986.

Later on, the production team of Maid in Malacañang clarified that they were not referring to the Carmelite Nuns.

Director Darryl Yap, through his Facebook page VinCentiments, stated that their research team based it on a 1988 article titled In the Grotto of the Pink Sisters written by American journalist and writer Anne Nelson.

A digital copy of the magazine’s edition can be accessed on Google Books.

When they visited Cebu during the height of the 1986 EDSA People Power Revolution, Cory and her then running mate and former vice president Salvador Laurel sought refuge at the Carmelite Monastery in Barangay Mabolo, Cebu City for a night – 14 hours to be exact – just to avoid the prying eyes of the military.

With them were Cory’s youngest daughter Kris, then 14 years old, and brother Jose “Peping” Cojuanco.

In Cebu, to trick military agents from tailing Cory, a convoy of vehicles with Cory supposedly in one of them made its way to the Cebu Airport on Mactan Island.

Cory was actually being driven to the monastery by the late Cebu City Councilor Antonio Cuenco, who was also one of Cebu’s leading opposition figures.

The Carmelite Monastery, being home to contemplative nuns under “Papal enclosure,” is off-limits to outsiders. Only heads of state are exempted from such rule.

Cory left the monastery bound for Manila at around 11 a.m. on Feb. 23, 1986. / with reports from the Philippine Daily Inquirer