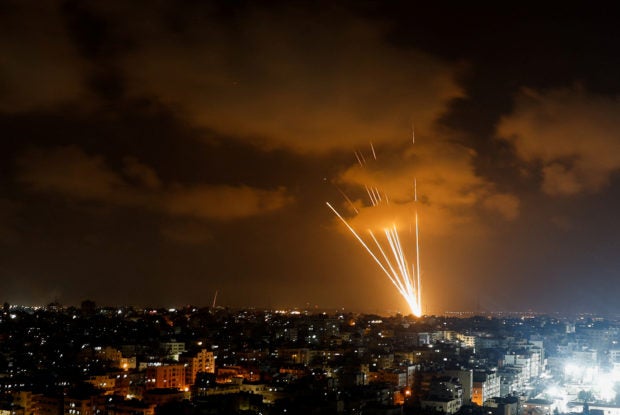 Rockets are fired by Palestinian militants into Israel, amid Israeli-Palestinian fighting, in Gaza City August 5, 2022. (REUTERS)

MANILA, Philippines – The Philippine Embassy in Israel on Saturday advised Filipinos to stay safe and remain vigilant following a series of air strikes in Gaza.

Palestinian militants earlier fired dozens of rockets at Israel on Friday, in retaliation against Israeli airstrikes that killed 10 people.

The embassy, in a social media post, outlined precautions Filipinos can take amid the conflict, such as avoiding crowded places.

(As much as possible, avoid or delay going to crowded places).

For Filipinos staying in the Gaza Envelope, the embassy has temporarily banned educational activities, while work is still allowed inside standard protected spaces in bomb shelters.

The embassy also said that only 10 people can gather outdoors, and 50 indoors.

According to the statement, Filipinos in other parts of Israel are also discouraged from going to critical areas near the borders of Gaza and Lebanon, including Golan Heights.

In volatile situations, the embassy told Filipinos to prioritize their safety and to not take pictures and videos.

(If you hear a gunshot, if you see disorder, or if you find yourself in the middle of conflict or violence, seek shelter or avoid it, and leave the place right away).

Filipinos in Israel are also advised to follow the guidelines set by Israeli authorities, as well as staying updated on the situation through trusted media outlets.