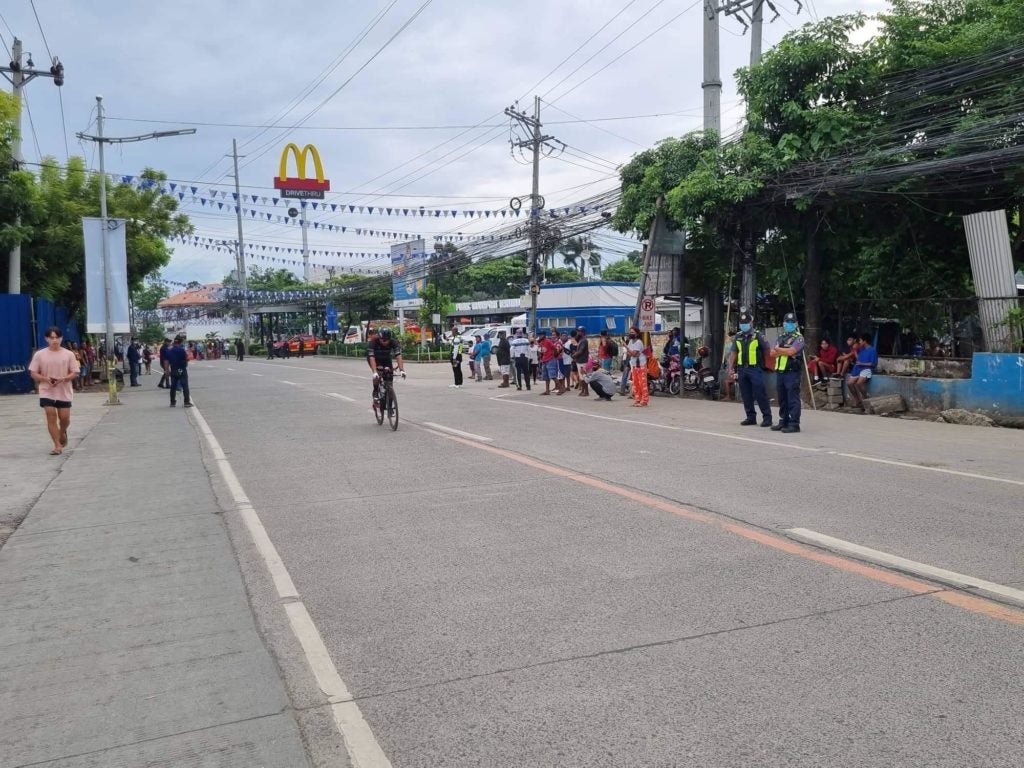 A race contestant of the Ironman 70.3 pedals his way to the South Road Properties in Cebu City which is one of the race routes of the bike segment of the competition. | Pegeen Maisie Sararaña

CEBU CITY, Philippines — There were no major untoward incidents during the Ironman 70.3 race and this was “generally peaceful”.

This was the assessment of Police Colonel Arnel Banzon, chief of Lapu-Lapu City Police Office (LCPO), on the security during the race.

Since the event is still ongoing as of this posting, Banzon said that they only pulled some policemen assigned at the race route.

For his part, Police Lieutenant Colonel Rene Kyamko, deputy director for operations of the LCPO, said that as of this posting, at least 50 personnel were already pulled out from the 355 policemen deployed to secure the event.

As early as 3:30 a.m. on Sunday, August 7, police personnel were already deployed to their assigned areas.

(It was generally peaceful although there was occasional rains but there were no major incidents.)

According to the LCPO report, there were 1,456 registered participants for this event the race route starting at Mactan Newtown area in Lapu-Lapu City reached as far as the South Road Properties (SRP) in Cebu City.

For his part, Harold Alcontin, section head operations and warning of the Cebu City Disaster Risk Reduction and Management Office (CDRRMO), said that they provided medical assistance to at least three participants during the Ironman 70.3 race along the SRP in Cebu City on Sunday, August 7.

One of the patients felt pain in her eye, another man also had laceration, and one American biker vomited and decided not to continue with the race.

American biker Marc Chung decided not to continue with the race after he threw up twice. Chung said that the weather was too hot to bear, which he claimed was the possible reason why he vomited and did not feel well.

CDRRMO personnel of Cebu City responded and took care of Chung who quit the race at the SRP area.

He said that this was the 6th time that he participated in the event.

Alcontin, for his part, further assessed the entire event as “smooth sailing”, saying that there were no major untoward incidents that happened within their areas of jurisdiction.

Read Next
Rains in Cebu: 624 affected as flood hit 5 villages in Barili