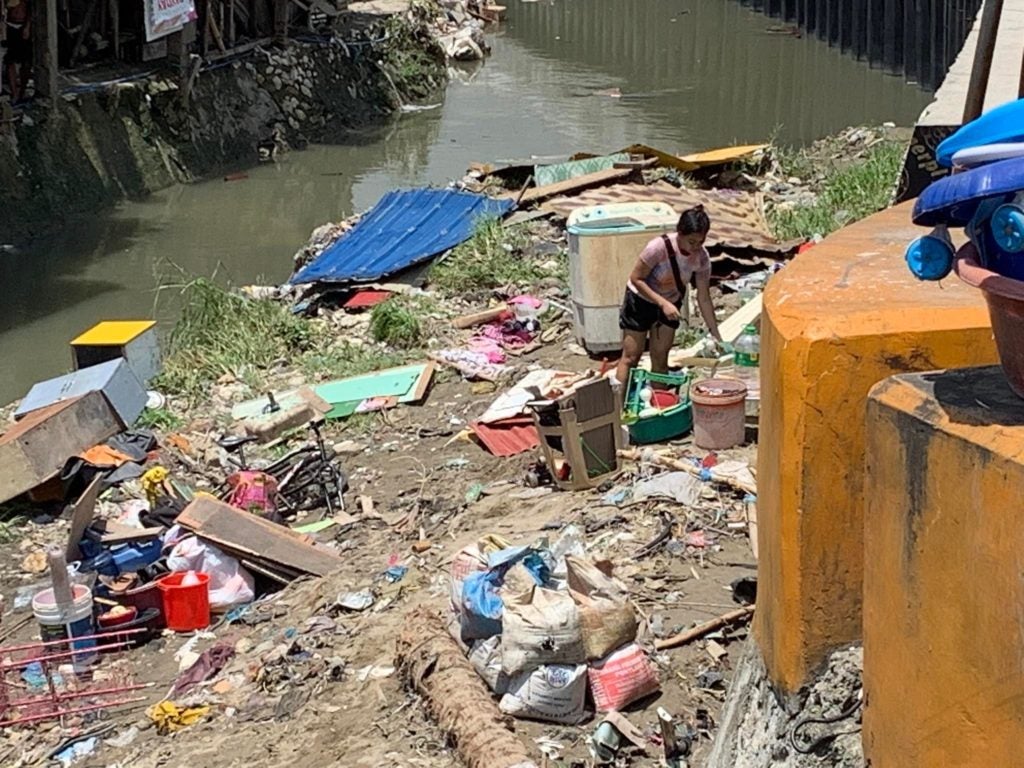 Affected families of the citywide clearing operations in the three-meter easement of the city’s waterways particularly in the Kinalumsan River are temporarily housed in the San Nicolas Elementary School. | Morexette Marie B. Erram

CEBU CITY, Philippines — Olga Galo stood at one end of Kinalumsan Bridge along N. Bacalso Avenue on Monday, August 8, watching authorities dismantle the house where she and her family once lived.

The 29-year-old housewife was among the dozens of individuals, who said goodbye to their previous homes as the Cebu City government officially began its clearing operations on the city’s waterways and easement zones on Monday.

At least 2,000 structures, including the one that previously housed Olga’s family, were identified to have encroached on the three-meter easement zone of the city’s major tributaries and other waterways,

Monday’s clearing operations along Kinalumsan River was led by the Cebu City Disaster Risk Reduction and Management Office (CCDRRMO), Division for the Welfare of the Urban Poor(DWUP), Department of Public Works and Highways (DPWH), Department of Engineering and Public Work (DEPW), and the Cebu City Environment and Natural Resources Office (CCENRO).

For affected families or residents like Olga, they are rooting for the city’s promise to provide them relocation, saying that the prospect of looking for another place to rent and stay is a heavy burden.

Olga admitted that her family did not resist when the city government told them that their house along Kinalumsan River would be destroyed on Monday.

She said the floods last August 3 made her realize that the place they once called home may no longer be safe.

Kinalumsan River overflowed last August 3, sweeping not only houses along its way but also at least two individuals. Fortunately, the victims survived the ordeal.

Olga said she, her live-in partner, and their four children barely escaped from their home on the afternoon of August 3 when the flood water along Kinalumsan River overflowed.

All houses on the banks and underneath Kinalumsan Bridge were submerged, she added.

(Our things were all gone. The only things we managed to take were our clothes and ourselves. Since then, we did not return to our house. We just lived with our friend (across the highway).)

The mother of four was born and raised in Barangay Duljo Fatima, in particular, on the banks of the Kinalumsan River. It is also where she and her live-in partner, a trisikad driver, raised their family.

The floods last August 3 was the worst that happened in her lifetime, said Olga.

(That is why we are not inclined to return there because what is important is that our lives will be safe, the lives of our family.)

Olga and the occupants along Kinalumsan River will be staying temporarily in San Nicolas Elementary School until the city government has ironed out their relocation plans.

(We can also assist if they like to return to their provinces.)

The city government also said residents, whose houses stood within the easement zones along Kinalumsan River in Barangay Duljo Fatima have been notified as early as 2019 that they would need to vacate the area.

To fast-track the implementation of a DPWH-led, flood-control project on Kinalumsan River, the city, in 2019, began providing each family up to P35,000 in cash assistance to help them look for other places to stay.

However, most of them remained in the area due to financial and logistical difficulties, said Aviola.

In the meantime, Councilor Jerry Guardo said assessment was still ongoing to identify other areas that could be subjected for the citywide clearing operations on easement zones.

“We will meet up regularly, every Thursday, in the afternoon. After the implementation, we (will) make (an) assessment and then we will identify another river siguro sa  (perhaps in the) succeeding week,” Guardo told reporters in a separate interview.

(We will conduct a walkthrough, and make an assessment also on how we can help the contractor to expedite the implementation of the project because this delay is really affecting the project.)