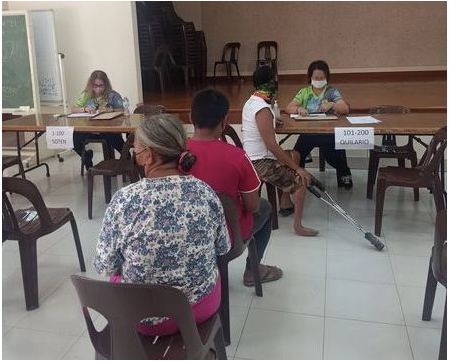 Persons with disabilities (PWDs) wait for their turn to receive the P2,000 cash aid from the Cebu City government in one of the distribution centers for the aid. | Cebu Environmental Sanitation and Enforcement Team (CESET) via Wenilyn B. Sabalo

CEBU CITY, Philippines — Some 4,824 persons with disability (PWDs) from 39 of Cebu City’s 80 barangays have already claimed their P2,000 financial assistance for the months of June and July 2022.

The figure is based on the field reports that the Cebu City Department of Social Welfare and Services (DSWS) was able to collate on the first day of distribution of financial assistance on Tuesday, August 23, 2022, according to the Cebu City government Public Information Office.

Reports from other teams assigned in other barangays are also still coming in as of this writing.

A total of 13,337 beneficiaries from the City’s 80 barangays are eligible to claim their cash assistance or equivalent to a total of P26,674,000 in funding.

Personnel from various City Hall departments were deployed in barangays to act as disbursing officers. In addition to field distribution, they also conducted house-to-house distribution to cater those who are not really able to claim their assistance on designated distribution sites.

According to the city, authorization letters are no longer required for representatives of the PWD who would claim the assistance on their behalf. They just have to present a valid ID and sign the payroll.

Those, whose PWD IDs have expired last June, are still entitled to receive their P1,000 financial assistance for the month of June.

At last, a law giving PWDs more access to education