CEBU CITY, Philippines — The Talisay City police will file a complaint on Tuesday, August 30, 2022, against a city resident, who posted an unverified report on her Facebook account last August 25, 2022, about an incident in Barangay Cansojong in this city.

Police Lieutenant Colonel Randy Caballes, chief of Talisay City Police Station, said that they were still finalizing the necessary documents needed for filing a complaint against a certain Grace.

(We are still checking Grave Scandal or [Fake news under] Article 154 of the Revised Penal Code.)

On her Facebook post on August 27, 2022, the said resident, Grace (not her real name), posted a public apology admitting that what she posted last August 25, was unverified. She also apologized for causing panic among Talisay residents. 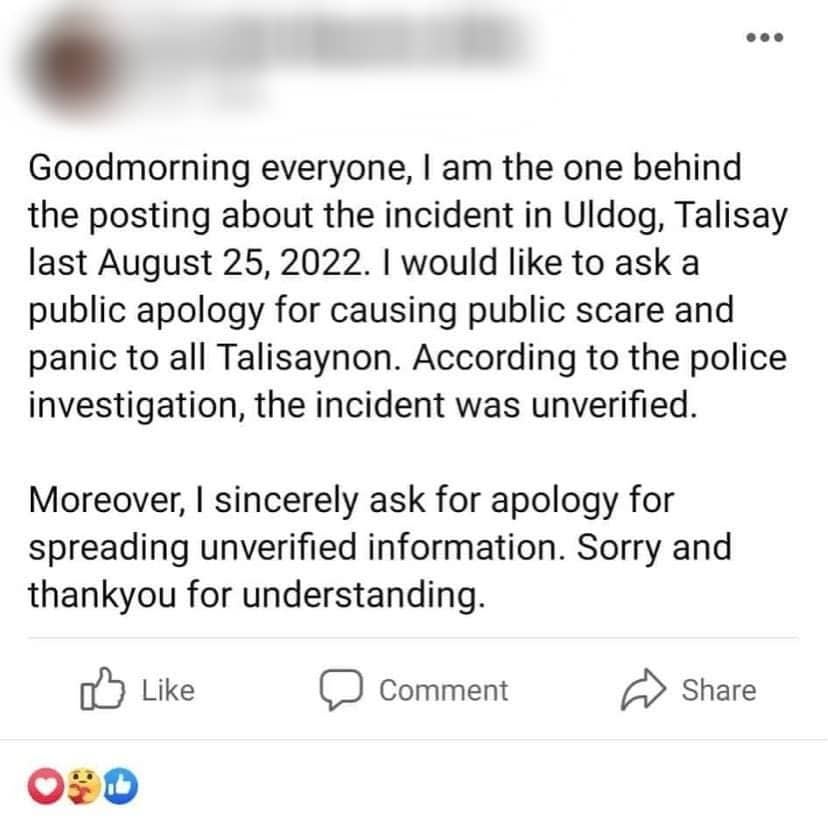 A woman from Talisay City released a public apology for what she posted last August 25, 2022, that caused panic to the general public.

Caballes said that this should serve as a warning to everyone to not post unverified information on their social media accounts.

(This is a warning to the public. If ever they hear something, they should verify it to find out if it is true. Then report it to the police station so that this could be confirmed before they would pst on their social media accounts so that we can avoid a public scare or avoid alarming the public.)

Caballes is referring to the incident in Barangay Cansojong, wherein Grace, who was on a motorcycle, at that time, passed by a screaming woman. However, it was still uncertain if it was a case of kidnapping or if the woman had just some quarrel with somebody.

Instead of verifying this, Caballes said that Grace posted online that ‘there was a kidnapping that happened.’ 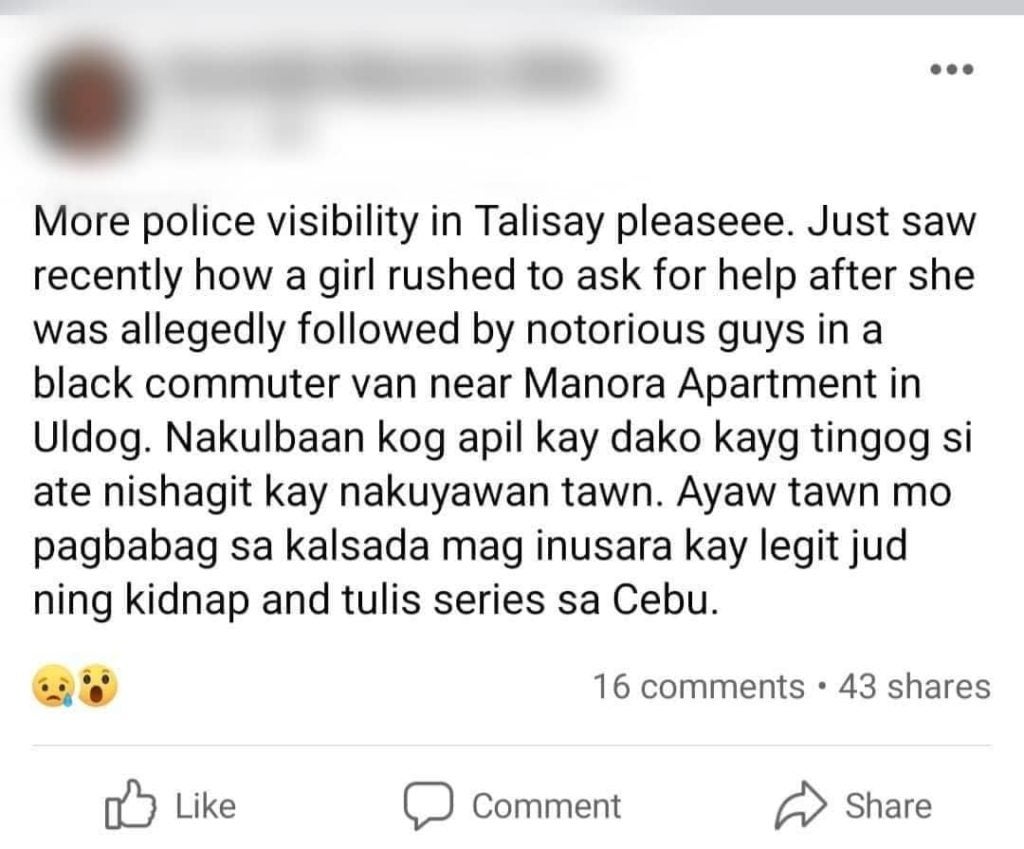 This was the Facebook post from the same person that apparently caused panic to the public last August 25, wherein reports on alleged kidnapping and attempted kidnapping were making noise online.

On the other hand, Caballes said that they were still waiting for the owner of a house where they found a security camera from where the incident in Barangay Biasong happened and they had also interviewed witnesses there.

On Friday, August 26, police met with the minor, a high school female student, who was allegedly the victim of the alleged attempted kidnapping in Barangay Biasong last August 25. The minor told police that she made a stop on her way home from school. As she headed home, a van allegedly stopped near her.

The driver allegedly got off the vehicle, approached her, asked if she was heading home, and then offered her a ride. She refused the offer. The minor got safely home.

However, a witness told police that he saw that that driver got off from the vehicle to pee and later ate ‘balut’.

For now, Caballes said that they could not confirm whether or not there was a kidnapping or attempted kidnapping incident pending their ongoing investigation.

He also reassured the Talisaynons that the peace and order in the city remained manageable.

AKG-7, CCPO investigating use of ‘recycled’ photos of kidnapping on social media

AKG-VFU: No reports of kidnapping in the region so far