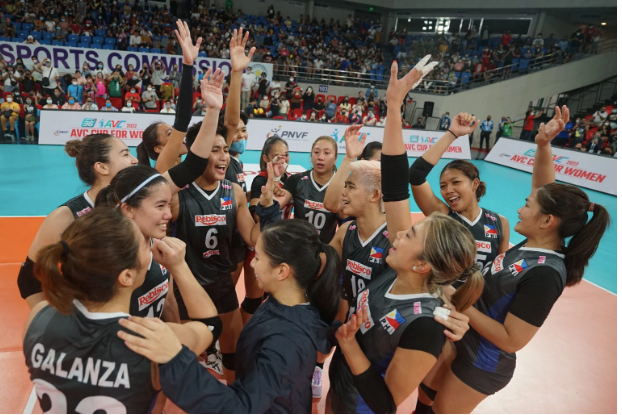 Creamline-Philippines celebrate after pulling off a comeback win over Australia in the AVC Cup for Women. AVC PHOTO

MANILA, Philippines — Tots Carlos and Jema Galanza delivered and the Philippine women’s volleyball team pulled off a thrilling come-from-behind 21-25, 25-19, 19-25, 25-18, 15-12 victory over Australia and advance to the battle for fifth place of the AVC Cup on Sunday at PhilSports Arena.

Although they showed signs of fatigue coming off a four-set quarterfinal loss to Thailand late Saturday night, the Creamline Cool Smashers still managed to fight back from a 1-2 deficit, behind the big hits of Carlos and Galanza, to edge out the Volleyroos in a grueling two-hour and 31-minute match.

When the home team went down 6-8 in the decider, Galanza scored three straight points for a 9-8 lead before stretching it to three, 12-9.

Australia, however, scored three unanswered points with Caitlin Weiler and Stefanie Weiler tying it at 12-all.

The Philippines regained the lead thanks to an attack error by Weiler while Jeanette Panaga put the Nationals at match point and Carlos unleashed the game-winning attack.

“(Fatigue) was a big factor. But the game must go on. Our players are really competitive. They still gave their 100 percent despite playing weary,” said Creamline head coach Sherwin Meneses in Filipino.

Carlos recorded her tournament-high 26 points, while Galanza scored 11 of her 18 points in the last two sets to spark the rally.

“I’m so happy. Everyone is tired. But I’m proud of what our team is achieving,” Galanza, who was also a member of the national team when the country made its AVC Cup debut in 2018, said in Filipino after bouncing back from her six-point output against Thailand in the quarterfinals.

Celine Domingo also played a vital role in the victory with 15 points off 11 attacks, three blocks, and an ace, while setter Jia De Guzman again displayed her playmaking brilliance.

The Filipinos went down 3-15 in the third set but they never wavered as Galanza nailed the timely hits in the fourth to force a decider.

Australia remained winless in the tournament through five games after giving up 30 errors. Tipping led the charge with 25 points built on 14 attacks, six blocks, and five aces, while Weiler and Rebecca Redgen added 17 and 12 markers, respectively.

The Volleyroos face Iran for seventh place at 10 a.m. on Monday.