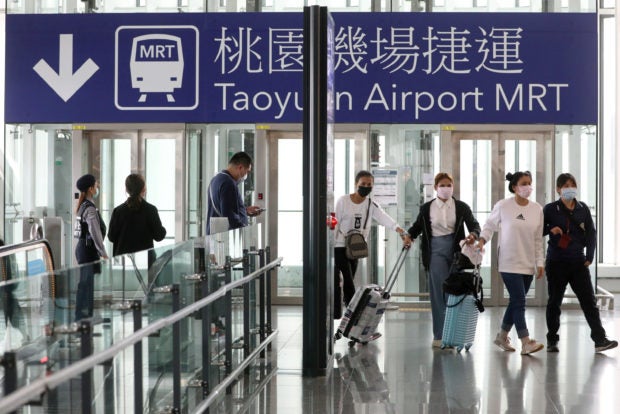 FILE PHOTO: Travelers arrive at the airport as the Taiwanese government announced a ban for most foreigners entering the island, as part of preventive measures against coronavirus disease (COVID-19), at Taoyuan International airport in Taoyuan, Taiwan, March 18, 2020. REUTERS/Ann Wang/File Photo

TAIPEI — Taiwan will resume visa free entry for visitors from countries including the United States and Canada from next week, the government said on Monday, as it continues to ease controls put in place to contain the spread of COVID-19.

Taiwan had kept its entry and quarantine rules in place as large parts of the rest of Asia have relaxed or lifted them completely, though in June it cut the number of days spent in isolation for arrivals to three from seven previously.

Taiwan has reported more than 5.3 million domestic cases since the beginning of the year, driven by the more infectious Omicron variant. But with more than 99% of those exhibiting no or mild symptoms, the government has relaxed rather than tightened restrictions in what it calls the “new Taiwan model.”

The decision was made based on the fact that most countries around the world have already reopened their borders and resumed pre-pandemic border measures and the need to balance epidemic prevention, economic and social activities and international exchanges.

Command center chief Victor Wang told reporters the three days of quarantine and need for a PCR test upon arrival would remain for the time being, as well as the current cap on 50,000 arrivals a week.

Taiwan, which has a well vaccinated population, has already ended the requirement for pre-departure negative PCR tests.

Throughout the pandemic Taiwanese citizens and foreign residents have never been prohibited from leaving and then re-entering, though have had to quarantine either at home or in hotels.

Before the pandemic, Taiwan was a popular tourist destination for mainly Asian visitors, with Japan, South Korea and Southeast Asia the most important markets.

Your subscription could not be saved. Please try again.
Your subscription has been successful.
Read Next
Pampanga Delta clobbers Consolacion Sarok Weavers to become PSL 21-U national champions