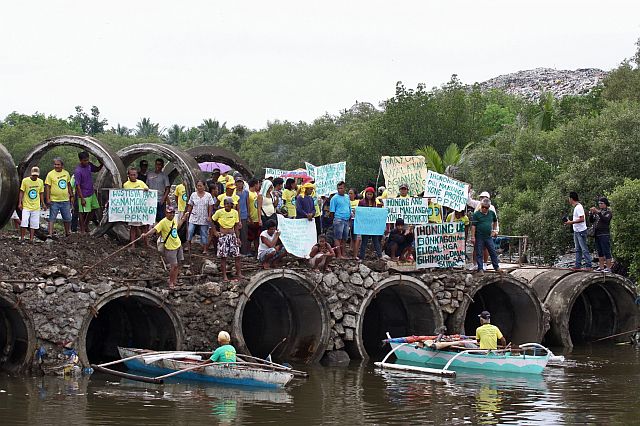 In this 2016 photo, fishermen of Barangays Cogon Pardo, Mambaling and Pasil with their families hold a protest against the culvert bridge project at the South Road Properties (SRP) service road leading to the Inayawan Landfill because it prevents their bancas from passing through the Talisay City side. (CDN PHOTO/JUNJIE MENDOZA).

CEBU CITY, Philippines — The Cebu City Council is set to formally request the Office of the Mayor to demolish the six-year-old culvert bridge built across South Road Properties (SRP).

Councilor Pastor “Jun” Alcover, Jr., during his privilege speech last Wednesday, Sept. 7, 2022, claimed that the said culvert bridge did not serve its purpose.

The culvert bridge, built to connect SRP and Inayawan landfill, was constructed during the last quarter of 2016 under the administration of former city mayor Tomas Osmeña.

Alcover admitted that he was among those who opposed the construction of the said project before and joined several protests against the project in 2016.

In his privilege speech, Alcover also claimed that the project negatively affected the livelihood of at least 100 fisherfolk from Barangays Basak San Nicolas, Bulacao, Cogon Pardo, Duljo-Fatima, Inayawan, and Mambaling as the culvert bridge allegedly prevented even the small non-motorized boats from passing through the channel going to the sea.

Majority Floor Leader Councilor Jocelyn Pesquera said that the demolition of the culvert bridge is also favorable to the city’s tourism plan in the area. Pesquera also chairs the Cebu City Tourism Commission.

“I really support (it) because as I already mentioned earlier, we already have plans for tourism in that area and it’s so difficult for us to clean up if the water cannot flow freely. If those culverts are removed, it’s easier for us to improve, and if ever there will be plans for the city to have another access towards SRP, I believe a proper bridge is more suitable than that,” she told the council.

Councilor Rey Gealon, likewise, suggested to the council to request the Office of the Mayor to order the demolition of other bridges in the city that are constructed of the same nature as the culvert bridge connecting SRP and Inayawan landfill.

“As I have observed, with the construction of the third bridge, having sat there as a member of the working group, they do not allow any obstruction of the waterways, and this kind of bridge obstructs the passageway of water vehicles,” he said.   /rcg