One queen, many presidents: Elizabeth II’s ties with America 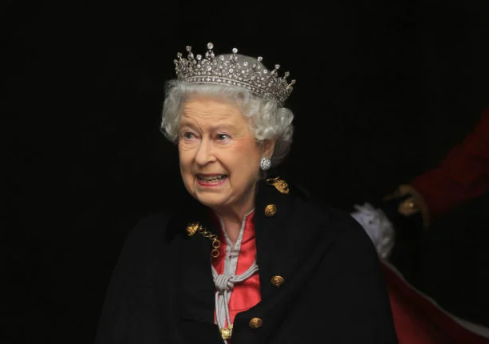 Britain’s Queen Elizabeth leaves after attending a service for the Order of the British Empire, at St Paul’s Cathedral in London, Britain, March 7, 2012. (Reuters)

She had scones with Dwight Eisenhower, went riding with Ronald Reagan and took tea with Donald Trump: Queen Elizabeth II saw 14 US presidents serve during her reign, and she crafted her “special relationship” with America in her dealings with them.

From Harry Truman to Joe Biden, the late monarch met every man who inhabited the White House during her 70 years on the throne save one — Lyndon B Johnson, who moved into the Oval Office following the assassination of John F Kennedy. 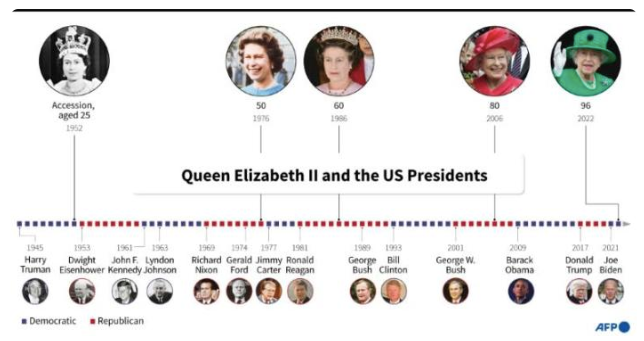 Her first visit to the United States came in 1951 — the young princess waved to the crowd from the back seat of a convertible, with a visibly delighted Harry Truman at her side.

Even though she had not yet become queen, Elizabeth exhibited the oratory gravitas of a future head of state when she told the former British colony: “Free men everywhere look towards the United States with affection and with hope.”

After that trip, color brightened official photographs of her travels across the pond.

Elizabeth, whose reign dovetailed with the rise of the United States as a global superpower, offered all US presidents the same treatment: the studied distance that protocol requires, and the carefully calibrated air of familiarity.

Those meetings came at everything from state dinners at the White House to the time-honored tradition of tea time at one of her many royal residences.

She welcomed the Kennedys to Buckingham Palace for a lavish dinner, and danced in a yellow dress and glittering tiara with Gerald Ford at a state dinner in July 1976 that coincided with the bicentennial of American independence.

While the queen slaked the media’s thirst for all things formal and splendid, she also understood the power of moments that were less scripted and more personal.

In 1982, she and Reagan, a one-time actor who appeared in Westerns, rode horses near Windsor Castle. He returned the favor the following year, treating the monarch to tacos and guacamole at his California ranch.

George H.W. Bush in 1991 took Elizabeth to a baseball game in Baltimore, where she shook hands with all the players. According to reports at the time, the queen passed on the chance to eat a hot dog at a pre-game reception, but did sip a martini.

In a handwritten 1960 letter to Eisenhower preserved at the National Archives, she gave the retired general her scone recipe, after he’d eaten the teatime favorite at Balmoral, the estate in Scotland where she died on Thursday at age 96.

“I think the mixture needs a great deal of beating,” the queen explains, adding that the baker should not let the dough sit too long before cooking.

She also suggests using “golden syrup or treacle instead of only sugar,” noting “that can be very good, too.”

In more recent years, American leaders have expressed feeling like the aging queen was something akin to a mother figure.

“I don’t think she’d be insulted but she reminded me of my mother — the look of her and just the generosity,” Biden said after his June 2021 meeting with the queen.

The comment is particularly salient, given that when Biden was set to meet the queen for the first time, in 1982 in Britain when he was a young senator, his mother, a proud descendant of Irish immigrants, said: “Don’t you bow down to her.” 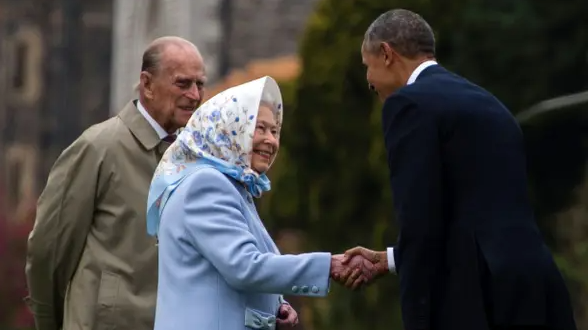 Trump told the Daily Mail that he thought of his own mother as he and wife Melania had tea with Elizabeth II at Windsor in 2018.

“My mother passed away a while ago, and she was a tremendous fan of the queen,” he said at the time.

Obama, 15 years younger than Trump, said Elizabeth reminded him of his grandmother.

The 2009 meeting of the queen and the Obamas at Buckingham Palace has remained in the public’s imagination: Michelle briefly put her arm around the queen and, to everyone’s general surprise, Elizabeth did the same.

“She meant a great deal to us,” the Obamas said in a statement following her death.

The same words cropped up in the remarks: elegance; dignity; duty; humor, kindness.

Biden ordered that US flags be flown at half-mast until the queen’s funeral, including over the White House, which was torched in 1814 by British soldiers.

In a lengthy homage, the Democratic leader summed up the mood felt across the nation, a country created less than 250 years ago, while the queen lived for nearly a century.

“Her Majesty Queen Elizabeth II was more than a monarch. She defined an era,” he said.