Fare hike will impact on our budget – commuters 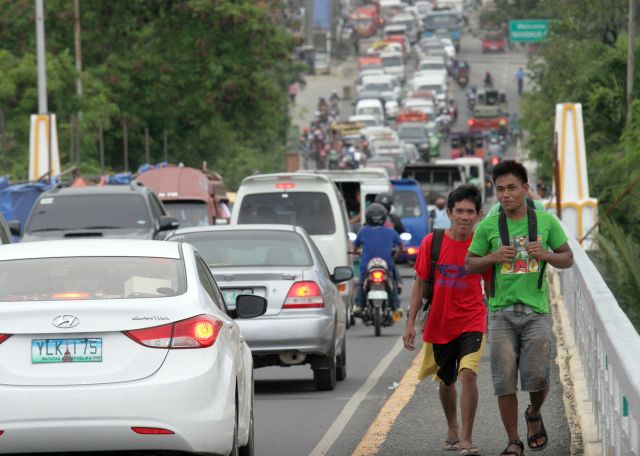 CEBU CITY, Philippines — How do Cebuanos feel about the latest fare increase?

The Land Transportation Franchising and Regulatory Board (LTFRB) approved on Friday, Sept. 16, 2022, the fare hikes for public utility jeepneys, buses, taxis, and ride-hailing applications that will take effect on October 4.

The LTFRB, in a statement, said they approved a P1 hike for traditional and modern jeepneys and a P2 hike for ordinary and aircon city buses as well as provincial buses. They also approved P5 hike for the flag-down rates of taxis and the Transportation Network Vehicle Services (TNVS).

This weekend news, however, received various reactions from the commuters here in Cebu City.

For instance, Mary Joy Bagares said this was ‘alarming’ news that would impact on her monthly budget.

(Because the fare for PUVs is already expensive and they won’t rollback their fare if there will be a gas rollback. The fare hike will go with the increase in commodities. We are just hoping that there will also be a minimum wage hike.)

In addition, Kate Denolang of Mandaue City said that she was “quite conflicted” over whether she would be happy with the benefits it would give to the drivers and others in the transportation industry or disheartened for the commuters as this would mean increased expenses.

But she decided to empathize with the common sentiments of the commuters. Though she had been working from home, Denolang said she still would have to commute to get essentials or run personal errands.

“It is quite disappointing that sometimes my transportation fees would own a bigger toll on my whole errand expenses. I usually commute via bus, e-jeep, taxi, and Angkas. From my P50-P100 transportation budget for every errand in 2021. Now, I need to budget at least P150-P300,” she said.

“How much more if the fare increases again? Am I willing to spend as much as P500 just for transportation? I don’t think so. I may be lucky to work from home, and I go out at most three times a week. But how about those who need to go out and travel daily to work? This would be very disheartening for them,” she added.

Likewise, Kent Anthony Jimenez, from Cebu City, said this would really take a toll on commuting employees who were mostly now in a return-to-office setup.

“I, personally, really hate this since I’m working in another city and I travel every day. I have to adjust my budget again even if it’s only a 1-2 pesos increase, since when accumulated, would take a big cut of my salary,” he said, noting that two separate fare hike implementations happened this year in just a couple of months.

The last fare hike took effect last July 1, which made the new minimum jeepney fare across the country at P11.

Meanwhile, Jolissa Taboada, told CDN Digital that she chose to see this development as a deserved augmentation of drivers’ income.

(For me, I am okay with the increase in the fare at this time, where the prices of commodities have also increased and the gasoline, so this is a big help to the drivers especially that we are all now slowly returning to normal.)

Read Next
SSS announces delay in release of benefits, pension due to central office fire